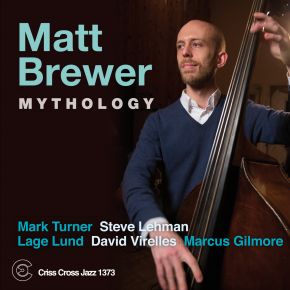 A leading bassist of his generation, Matt Brewer has distinguished himself in groups led by Greg Osby, Gonzalo Rubalcaba, Vijay Iyer, John Escreet and many others. His Criss Cross appearances on Mike Moreno's First In Mind and David Binney's Anacapa have also left a lasting impression.

On Mythology, his debut as a leader, the Oklahoma City-born, Albuquerque,  New Mexico-raised Brewer leads a sextet with some of the fiercest individualists on the jazz scene today: alto saxist Steve Lehman and tenorist Mark Turner in the frontline; guitarist Lage Lund and pianist David Virelles as ensemble voices and featured  soloists as well; drummer Marcus Gilmore bringing a flexible, swinging, highly structured rhythmic vocabulary to the table.