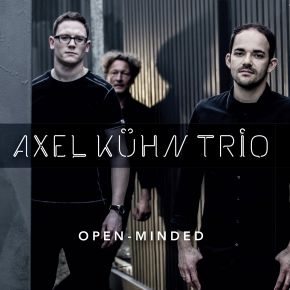 "There is something different about and in this music." This is how the renowned music journalist Volker Doberstein starts his liner notes in the booklet of the new CD of the Axel Kühn Trio. That's true; it already becomes clear with the first sounds that the trio has sought and found its own path. They have not come together to record a jazz album and demonstrate how good they can do that. Instead, the band leader and bassist Kühn first composed 10 songs, which develop a suction effect and take the listener on a journey through various harmonic landscapes, evocative sounds and emotionally charged dream-like scenes. An introduction here reminds you of a classical piece ("Desert Sand"), there you think that you are listening to a popular rock song ("Open-Minded") and the opener "Digital World" could also be a homage to metal music, even if the bass solo starts with a brief quote from "Summertime". The only third-party composition is then perhaps not by chance a hit by Guns'n'Roses: "Don´t Cry". That all initially sounds like eclecticism, but it is anything but that. All pieces are unified by the distinct will of the composer to structure melodies, so that the album seems to have been composed from one piece. You listen with pleasure during the complete 60 minutes without even wasting a thought on using the skip key. This is also because the three musicians put their almost unlimited technical skills at the service of music unpretentiously and inconspicuously. Music that you can also simply and succinctly call "just beautiful".

Band leader, bassist and composer Axel Kühn is one of Germany's most renowned and versatile musicians. Born in Tübingen in 1981, he has already won numerous prizes and can be heard on a dozen other CDs (two of them have been released on Double Moon Records: "Kühntett" and the "Anne Czichowsky Quintett" in 2014). The fact that he has played both with Cassandra Steen and the Mahler Chamber Orchestra is proof of his openness to different styles.

Ull Möck first studied classical piano, but already found the way to jazz and popular music as an adolescent. He is one of the inconspicuous people in the music business and consequently is often not perceived as what he really is: an important and even influential and very busy musician, who has received many distinctions and recorded on numerous albums. He fits perfectly into the trio, because he has never lost his youthful curiosity for everything exciting in music in the same way as Axel Kühn.

Drummer Marcel Gustke is the perfect third man in the trio, not only because he has already played alongside Ull Möck and Axel Kühn many times and is involved in common projects, but also because he is unbelievably versatile. He already took lessons from well known rock, pop and jazz drummers during his studies, so that very different musicians such as Barbara Dennerlein, Helen Schneider, Rhoda Scott and Ack van Rooyen have been glad to have him along.

Axel Kühn Trio (artist)More information
15-01-2015 Piano News
"Eleven compositions which are full of suspense and show how vivid it can be at the edge of the swinging mainstream. "