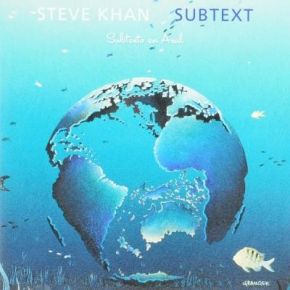 When Japan´s Jazz Life Magazine took a poll of the 22 greatest Jazz guitarists, Steve Khan was on the list, alongside greats (on any instrument) like Wes, Martino, Hall, Django, Christian, Benson, McLaughlin, Metheny, Stern, Scofield and Frisell. As both player and sometimes producer, Khan´s had the fortune to work alongside the likes of Brecker, Stern, Fagen, Zawinul, Sanborn, Erskine, Weckl, Anthony Jackson, Dennis Chambers and Manolo Badrena, to name only a few. In addition to teaching, he has also released instructional texts of solo transcriptions of two guitar legends without peer: Wes Montgomery and Pat Martino.

Steve Khan's new album SUBTEXT, subtitled Subtexto en Azul, stands out among the prolific jazz guitarist's much lauded body of work, and is highlighted with lyrical guitar phrases that weave in and out of a set of carefully chosen, superbly arranged and performed compositions. On the album, Steve continues his explorations of the grand traditions of Latin music, and this time, the core group features: Rubén Rodríguez (el. bass & baby bass), Bobby Allende (conga), Marc Quiñones (timbal), and Dennis Chambers (drums). At varying moments, they are joined by some great musicians as guest artists, including: Rob Mounsey (keys & orchestrations); Randy Brecker (flügelhorn); Gil Goldstein (accordion); and Mariana Ingold (vocals).

Steve uses his own compositions and enticing re-arrangements of jazz and latin standards to amplify the rhythmic ingenuity, textural creativity and technical brilliance for which he’s already well known.

Once again, the music was recorded by James Farber at Avatar Studios during January 29th-30th, 2014. Michel Granger's beautiful image graces the cover, and contributes its own particular "subtext."

Japan's JAZZ LIFE magazine has already written that the recording is: An ambitious work, hot music filled with Khan's artistry.