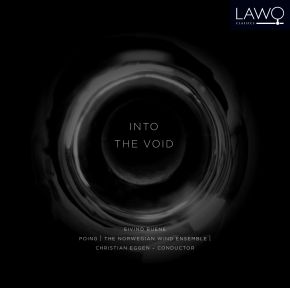 'Into the Void'  was written for The Norwegian Wind Ensemble and POING by composer Eivind Buene.

The title suggests a space that emerges where the notes and text end and the interaction between the musicians continues. The work has grown organically,in an atmosphere of trial and error, and exploration and learning.

Eivind Buene (b. 1973) has received commissions from, among others, Ensemble Intercontemporain,Birmingham Contemporary Music Group, Fondation Royaumont, and various Scandinavian orchestras and ensembles. Apart from writing music for soloists,
ensembles and orchestras, Buene also frequently engages in collaborations with improvising musicians, developing music at the intersection between classical notation and improvisation.

POING: The three musicians are among the world's top performers on their instruments, both as improvisers and as interpreters of notated music. Their unique flexibility results in many untraditional commissions by composers and festivals that go beyond the usual interpretation, interaction and dissemination of contemporary music.

The Norwegian Wind Ensemble: While the musical profile of this unique ensemble ranges from classical music to jazz, it has two particular areas of interest:historic music, with an emphasis on developing and nurturing an understanding of style and performance
practice; and real time music created here and now on the borderline between improvised and notated music.

It is the ensemble’s ambition to be trailblazers within the latter area by inspiring groundbreaking musical development.