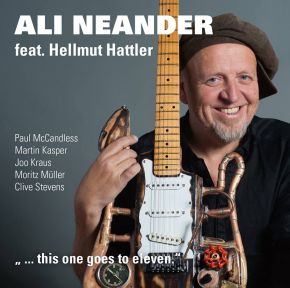 This One Goes To Eleven

Ali Neander from Frankfurt / Germany is a great guitar player . He has been one of the few who can consistently make you leap off your seat and whoop. Neander is not only a virtuoso improviser who doesn't seem to know what a cliche is, he is a natural contrarian who bucks prevailing trends and still trying to recall the passion of early jazzrock and combine it with contemporary sounds. There`s a little prog and kraut and ambient included his time for your enjoyment. Starting with german rockband Rodgau Montones more then 30 years ago, he is now one of Germany’s most requested studio cats.

Again with Hellmut Hattler on bass (Kraan, Tab Two), Martin Kasper Keyboards and Moritz Müller on drums Neander has recorded his second solo outing.. The dynamic of this well-seasoned band depends greatly on the interaction of Neander and his fellows.
Special guests are Paul McCandless (from the band Oregon), Joo Kraus formerly with Tab Two and fusion legend Clive Stevens.

"Hello everybody and welcome to my second journey into the wild and wonderous world in between jazz and rock.The first CD had a little more of a „hunters and collectors“-style soundwise , the new one could well be called a band effort.In the last years we had the opportunity to play enough gigs to develop more of a band sound and I´m glad we`re able to put that on CD now together with the phantastic contributions by our distinguished guests Paul McCandless,Joo Krauss and Clive Stevens. I`m still trying to recall the passion of early jazzrock and combine it with contemporary sounds.There`s a little prog and kraut and ambient included his time for your enjoyment.Bon appetit!" Ali

It's a very good Jazz Rock CD, and this is coming from someone who is usually not a big fan of most of the music that is coming out of Germany.

Hello I have mentioned the release of Ali's new album here http://kraan.dk - but where can I (or anybody) hear some tracks or samples ? His first album was awesome! best wishes Michael Bohn