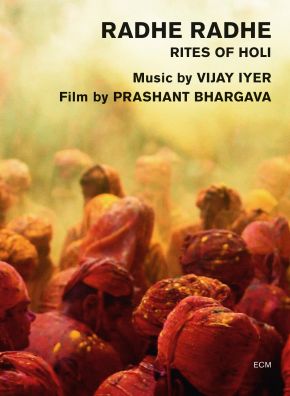 Radhe Radhe: Rites of Holi is a vivid multimedia collaboration by composer-pianist Vijay Iyer and filmmaker Prashant Bhargava, who were inspired by the centennial of the Stravinsky-Nijinsky Le Sacre du Printemps to explore another of rite of spring: the Hindu festival of Holi, famous for its revelry of color in celebration of the love between the divine Krishna and Radha. In northern India, Bhargava filmed the ravishing images of an eight-day Holi festival held in the city of Mathura, mythic birthplace of Krishna. Iyer – who released his ECM debut, Mutations, earlier this year – then composed his score as the musical complement to Bhargava’s beautiful visual ballet, drawing at times on the rhythms and chants of the Holi festival; the result is one of Iyer’s warmest, most colorful creations to date, as rich melodically as it is texturally. Released by ECM on Blu-ray and DVD, Radhe Radhe: Rites of Holi is a kaleidoscopic experience. Bonus material includes making-of documentary.