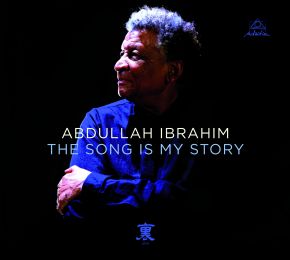 The Song Is My Story (vinyl)

We can celebrate several anniversaries at the same time with this recording. First, there is the 80th birthday of one of the most significant musicians in this world. We are also reminded of the time 40 years ago when he composed "Mannenberg", which soon became the hymn of the slums and townships of South Africa. Finally, there is also the end of apartheid 20 years ago.

He was born as Adolphe Johannes Brand in this country of unequal rights and already called himself Dollar Brand as an adolescent. He started playing piano when he was seven and already became a "professional musician" at 15. He emigrated to Europe–still as Dollar Brand–in 1962, where Duke Ellington discovered him shortly afterward. He then moved to the USA. That marked the beginning of his international career, which has lasted until today. He has converted to Islam in the meantime and returned to Europe long ago. Then he changed his name again and has been known as Abdullah Ibrahim worldwide for decades. His style is difficult to describe, even when you repeatedly come up against clichés of African melodies and harmonies. In addition, you can't miss the influence of great co-musicians such as Thelonious Monk. He said in an interview with the magazine "Zeit" in 2013:

"I have always sought for a specific sound my whole life. At the end of the 60s—I lived in New York in the meantime—this search became worse and worse. I walked the streets day and night, a restless African in America, who did not understand what was driving him. It wasn't the sound, but the silence, the silent moments in music."

Perhaps it is that which fascinates millions of people: Abdullah Ibrahim's treatment of time, space and silence. Three dimensions of music, which he—and probably only he—celebrates like a prayer put to music. It is not without reason that he writes on the CD cover: "Improvisation is mediation in motion".

Ibrahim said in the same interview: "There are people who can only play if they have sheet music. But we others improvise without knowing where we are headed. This makes us free. We don't fear situations that we don't know. We have a song, rhythm, harmony and pitch, and then we start to play with that, turn everything upside down … We jazz musicians are not afraid of letting things take their course."

However, the term "jazz musician" is a corset, which is much too constricted for this great personage, who has not lost any of this radiance. His music is "world" music in the good sense of the word. It not only links sounds of different genres and musical traditions, but also music with poetry, sound with feelings, melodies with stories – and people with people.

Abdullah Ibrahim visited Italy in the summer of 2014, played on the legendary "Fazioli" grand piano and visited the workshop where these pianos are crafted. There is a concert hall there with fantastic instruments, which sound as if they were created especially for Ibrahim. Abdullah Ibrahim recorded this CD there in free improvisation for the most part. Fortunately, professional films were shot during those days, so that we cannot only issue the CD, but also a DVD with concert excerpts as well as impressive comments by and conversations with Abdullah Ibrahim. 180 gram vinyl.

The story is my song is so relaxing to me, I put it on repeat and go to bed with it playing continuously.