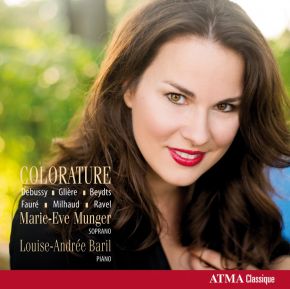 With her pure voice, spectacular range, and dramatic flair, Québécoise coloratura soprano Marie-Eve Munger has rapidly built a solid reputation as a singer in high demand for prestige engagements around the world, including house debuts at La Scala di Milano and at the Aix-en-Provence Festival in a new production of Elektra by Patrice Chéreau. For her first solo disc with ATMA, Munger has chosen a program of French songs that call upon all of the resources of her dazzling and sonorous voice.

Upcoming international engagements include L’Enfantet les Sortilèges at La Scala di Milano conducted by Esa-Pekka Salonen in May/June 2014, and at the Opéra-Comique in Paris as Isabelle in Le Pré au Clercs by Hérold in 2015.