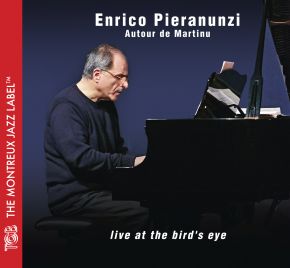 Born in Rome in 1949, Enrico Pieranunzi has long been one of the best-known and appreciated personalities on the European jazz scene. Pianist, composer, arranger, he has recorded more than seventy CDs under his own name, ranging from solo piano to trio, and from duet to quintet. He has played in concert and in the studio with Chet Baker, Lee Konitz, Marc Johnson, Joey Baron, Paul Motian, Chris Potter and Charlie Haden, performing at all the most important international festivals, from Montreal to Copenhagen, from Berlin to Madrid.

Pieranunzi's formative years embraced both classical and jazz piano, and the influence of Debussy is readily apparent in the lush romanticism at the heart of his music. Emerging in the early '70s, Pieranunzi's lyrical approach quickly brought him to the forefront of the European scene, and in 1984 he formed a trio with Marc Johnson and Joey baron, the first of several outstandig groups with American musicians.

In 1989, 2003 and 2008 he was voted Musician of the Year in the Italian magazine Musica Jazz critic's poll and he was 1997 recipient of the Django d'Or Award for best European Jazz Musician.

Enrico Pieranunzi (composer)More information
01-05-2017 Jazz Inside
"The result is thought-provoking piano music that is highly enjoyable."
09-02-2015 Jazzthing
"There are no cracks in Pieranunzi's elegant, lyrical, somtimes winking playing when he mixed classical pieces with colours from the many epochs of the modern jazz piano. The listening is fun as well as absolutely educational."
15-01-2015 Stereo
"a contemporary piece of jazz"
05-01-2015 Fono Forum
"a contemporary piece of jazz"
15-11-2014 Jazz’N’More Schweiz
"Coverstory"
15-11-2014 Jazz'n'More Schweiz
"a jazz pianist with international reputation who also has great recognitions in the classical sector. His latest release is right in the intersection of these two worlds, connected through improvisations."