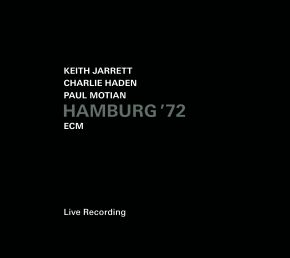 The Keith Jarrett Trio, playing live at NDR Funkhaus, Hamburg in July 1972. The trio with Haden and Motian was Jarrett’s first great band, his choice of players a masterstroke. Charlie and Paul hadn’t worked together until Jarrett brought them into each other’s orbit in 1966. With the bassist who had learned his craft in Ornette Coleman’s band, and the drummer from Bill Evans’s ground-breaking trio, Jarrett was able to explore the broadest scope of modern jazz, from poetic balladry to hard-swinging time-playing to ferocious and fiery free music. The improvisation heard in the Hamburg concert includes episodes with Keith on soprano sax and flute as well as piano, while Motian expands the role of percussion in the music, developing the supple, elastic, supremely unpredictable vocabulary that would subsequently become such a crucial part of both Jarrett’s groups and Paul’s own. The interaction between the three musicians is uncanny throughout, reaching a peak in an emotion-drenched performance of Charlie Haden’s “Song for Che” (this is Jarrett’s only recording of a piece that has become a new jazz classic). But from the first notes of “Rainbow”, with its radiant piano, it is clear that something special is happening here.

The German radio concert from which this album is drawn was part of a tour – the first European tour for this trio – organised by ECM. Manfred Eicher returned to the original analog sources, remixing the music recorded by NDR engineer Hans-Henirich Breitkreuz for this edition in Oslo in July 2014, together with Jan Erik Kongshaug. (As it happened, the work took place the day after Charlie Haden’s death.)

Haden’s importance in this music can hardly be overstated. He is such a strong, centering presence. Jarrett plus Haden was always a special combination, of course, as recordings from Arbour Zena to Last Dance have eloquently shown, but for dynamic interplay between pianist and bassist the Hamburg recording is hard to beat. Charlie highly valued this musical association, and the way in which Jarrett would compose tunes for the strengths of the trio members: “I think some of the greatest music made in that time period came out of that group,” Charlie told Ethan Iverson a few years ago. “Keith was always his own person, with original ideas as a leader. He wrote specifically for us. I loved it. He showed up at every rehearsal and sound-check with new music. It’s amazing when you go over a new tune at a sound-check and can’t wait to play it that night, since it already felt like ‘you’.”

The Hamburg concert dates from the beginning of ECM’s association with Keith Jarrett, whose solo album Facing You had been recorded the previous November and released just three months before this show.

In the US, Keith Jarrett had begun to include saxophonist Dewey Redman in his group music and the trio was in the process of morphing into the group colloquially known as Jarrett’s American Quartet. Several of the Jarrett tunes heard here, amongst them “Everything That Lives Laments” and “Piece for Ornette”, would also find expression in the quartet repertoire. Much inspired quartet music was ahead, including the landmark albums The Survivors’ Suite and Eyes of the Heart. But Hamburg ’72 captures the core trio of Keith Jarrett, Charlie Haden and Paul Motian at the very apex of its creativity.

Charlie Haden (artist)More information
Paul Motian (artist)More information
15-12-2014 Jazzism
""Hamburg '72 sounds sublime en shows three jazz gigants in the prime of their careers.""
10-12-2014 Volkskrant
"This is a fine album indeed, for instance because of the fact that it is a rather atypical Jarrett album. Besides piano (by his standards exuberant in Rainbow), he plays the flute and soprano sax."
10-12-2014 De Standaard
"The three young musicians who have been together since 1966, let themselves float in the moment and trust their intuition. Between them there is a intimacy and a wonderful interaction."
09-12-2014 NRC.Next
"“The three men, who play intensely in this concert, laid the foundation for Jarrett’s quartet and The Standards Trio, with a characteristic jazz vocabulary”"
08-12-2014 NRC Handelsblad
"Hamburg ’72 is a remarkable registration out of the first European tour of pianist Keith Jarrett's first successful band, with bassist Charlie Haden and drummer Paul Motian."
07-12-2014 Jazzflits
""Close your eyes and let yourself be carried away by these great artists""