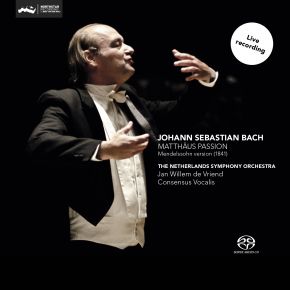 On 11 March 1829 the 20-year-old Felix Mendelssohn conducted a performance of the St Matthew Passion, composed by Johann Sebastian Bach, in the concert hall of the Singakademie in Berlin, almost 100 years after the work had last been played. Some 900 people were in attendance, and the performance was so successful that it was repeated twice, on 21 March and on Good Friday, 17 April 1829.

Mendelssohn was given the score of the St Matthew Passion for his 15th birthday, 3 February 1824.. He knew of the score as one of Zelter's pupils and as a member of the Singakademie, which had a few chorus parts from the St Matthew in its repertoire. Zelter, the conductor of the Singakademie, found the work too difficult to be performed in public. Mendelssohn, however, had a different opinion. In 1828 he set to work on the score, making changes in line with the day and age and the instruments then commonly used. Mendelssohn meant many of his changes to provide a better understanding of what, in his opinion, formed the heart of the passion story.

After its successes in Berlin, the St Matthew Passion was performed in a number of German cities. In 1841 Mendelssohn gave a performance in Leipzig, where he was then Kapellmeister, in the Thomaskirche, the church where the work had first been performed. For its performance in 1841, Mendelssohn again made alterations to the score, but fewer than in 1828/1829.

It is this version from 1841 that you will hear in this recording.
Mendelssohn was faced with a number of problems that made it quite difficult to perform the St Matthew Passion. For example, several instruments were no longer in general use: the oboe da caccia, the oboe d'amore, the gamba and the lute.

01-04-2015 Opus Klassiek
""So for someone who delicious and shamelessly dares to indulge in the good voice in an on top and highly romantic translation of this adaptation."
"

30-03-2015 NRC Handelsblad
""Rarity value with clarinets, a choir with soloists in chorale melody.""
27-03-2015 Trouw
""Orchestra and chorus meet excelent in this loving reconstruction of an important moment in music history."
"