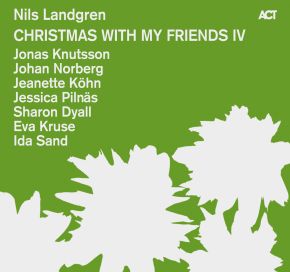 Christmas With My Friends IV

And year after year it rings out at Christmastime: Nils Landgren's "Christmas With My Friends" ensemble is a loyal companion for the most wonderful time of the year. The fourth edition again presents a diverse selection of international, Swedish, traditional and modern carols and atmospheric secular popular songs, with the familiar hushed and intimate mood we have come to know and love. "There are still so many songs that touch us and that we want to make our own," Landgren explains the reason for recording another "Christmas With My Friends".

And it is true: the ensemble's interpretations simply do not get any less fascinating. Why? Because a very special magic is inherent in this music, that goes straight to the heart and speaks from the soul of us all. Because it is not sentimentalised and kitschy, but rather exudes a peaceful and familial serenity that is highly addictive. Because this Christmas music is not artificial and calculated, but real, and because it is a special desire and need of Landgren and his family of musicians.

Ever since the "Christmas With My Friends" debut came out in 2006, many people simply can't imagine a Festive Season without this music. The "most beautiful, touching, magnificent Christmas CD of the year. [...] Luminescent. Sparkling. Celebratory." said STERN magazine at the time, and it remained full of praise for the following albums as well: The music "sparkles like the clear night sky of a Nordic winter" ("Christmas With My Friends II") and the third edition it lauded as simply "splendid Christmas music". All three albums have now attained jazz platinum status in Germany. The ensemble's Advent concerts are generally sold out to the last seat, as will most certainly be the case again on the Germany tour this December, when people flock to the churches and music venues to indulge in Christmas spirit.

What makes the "Christmas With My Friends" interpretations so unique? Most of all the fact that the people who have joined up to make them are not only congenial musicians, but also true friends of many years' standing who love to make music together. You can feel the harmony and connection of the group in the results. "Christmas With My Friends" is teamwork, not a one man show.
Nils Landgren understands like few other band leaders how to put his comrades into the limelight, to give them the freedom to stamp their personalities on the music: Jessica Pilnäs shines with her mellow, crystal-clear voice, complemented by the soulful timbre of Ida Sand, who also takes charge of the piano. Soprano Jeanette Köhn lends especially the traditional Christmas carols the necessary classical emphasis, and Sharon Dyall provides the bluesy touch, like on Odetta's "If Anybody Asks You". With his tastefully reduced acoustic guitar accompaniment, Johan Norberg injects the folk-music influence and builds the harmonious foundation, perfectly supplemented by Eva Kruse with her restrained and creamy bass. The jazzy embellishments from Johan Knutsson's saxophone set the interpretations alight and give them magnitude and candour. And over and over, Nils Landgren's butter-soft trombone punctuates the atmospheric music, and his typically fragile vocals touch the soul, for example in the intimate duet with Johan Norberg on his own composition "I Wish It Was Christmas".

Nils Landgren and his friends never tire of telling their personal, musical Christmas Story. Year after year. Because it is simply such a beautiful one. Merry Christmas!