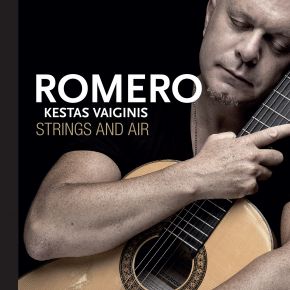 Playing music with only six nylon strings and a bit of air: What sounds like fragments of musical stopgaps at first impression once again becomes a masterpiece of minimalist virtuosity and unpretentious emotionalism in the hands of Grammy winner Hernán Romero. Following the celebrated "Tres Caras de una Moneda" with Hernán's mother Estela Raval and Al di Meola as well as Jerry Marottaof from Peter Gabriel's band, the guitarist of Spanish ancestry born in Argentina and currently living in New York presents an album together with the Lithuanian soprano saxophonist Kęstas Vaiginis that is full of breathtaking facets, which creates a great effect precisely due to its airy, celebrated minimalism. However, the brothers in spirit do not want to palm off any superficial crackers from all-too-well-known folklore clichés on their listeners. Instead, "Strings and Air" proves to be a carefully crafted sound journey, which takes listeners past Romero's known references classic, jazz, Latin American harmonies, flamenco, oriental and Mediterranean folk music and at some point even shortens this distance to the Baltic States to a bar line. The two do not take an earthy business trip, but instead a journey defying gravity without superfluous noises and interruptions caused by faded childhood memories, thoughts, hopes and disappointments. Each of the eight songs seems to float in a special way and disseminates a wondrous scent of melancholy and depth.