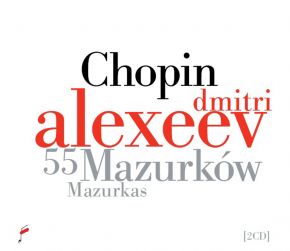 The first recording of the complete mazurkas of Fryderyk Chopin made by one of the most outstanding Russian pianists, a juror of the forthcoming Chopin Competition.  This album is released in the Institute’s ‘White Series’ of recordings, which, like ‘The Real Chopin’, is planned as a complete set of recordings of the entire oeuvre of Fryderyk Chopin, but performed on contemporary, rather than historical, instruments. Dmitri Alexeev piano {Steinway}
Recorded in the Witold Lutosławski Concert Studio of Polish Radio, Warsaw, 21–24 April and 22–25 July 2013
2014, Narodowy Instytut Fryderyka Chopina/The Fryderyk Chopin Institute