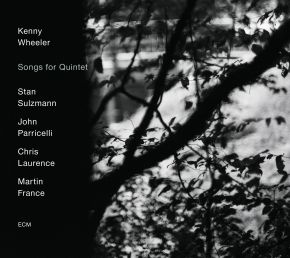 Songs for Quintet, Kenny Wheeler’s final recording, features compositions of relatively recent vintage, plus a fresh approach to “Old Time” – which the Azimuth trio used to play – and “Nonetheless”, a piece introduced on Angel Song. The album was recorded at London’s Abbey Road Studios with four of Kenny’s favourite players. Stan Sulzmann, John Parricelli, Chris Laurence and Martin France work together marvellously as an interactive unit, solo persuasively, and provide support for the tender and lyrical flugelhorn of the bandleader.

The session turned out to be the last occasion on which Kenny played with other musicians. He was not well enough to participate in what was intended to be a celebratory quintet gig shortly after the recording. If age and illness temper the strength of his sound on Songs for Quintet, the melodic imagination and the improvisational courage remain; the flugelhorn soloist could not be anybody but Kenny Wheeler. His exchanges with Stan Sulzmann throughout the album are full of charm, and indicative of the sense of friendship and mutual respect that characterises the whole band. Everybody’s looking out for the leader, which need not imply a reining in of energies. Listen to the roaring of the ensemble on the strangely-titled “1076”, for instance, and the way in which Kenny solos above the groundswell of drums and the thick swaths of electric guitar texture. This doesn’t fit conventional notions of “late music”.

The jaunty “Old Time”, whose bluesy impetus feels midway between Mingus and Adderley, may sound familiar to long-time ECM listeners. There is an earlier version entitled “How It Was Then”, with lyrics by Norma Winstone, which appeared on an Azimuth recording in 1994.

Waltzes were amongst Kenny’s favourite forms, and there are many in his discography. “A Pretty Liddle Waltz” is more than the characteristically self-effacing title suggests, its open spaces allowing Stan Sulzmann, Kenny and guitarist John Parricelli to stretch out. The tango “Sly Eyes” addresses more dramatic passions over its quasi-military beat. “Jigsaw” embodies a quality common to some of the loveliest of Kenny’s pieces. Built upon asymmetrical phrases that fit together according to their own logic, it flows in a manner entirely natural, eased along by Martin France’s drums, and with an elegant bass solo from Chris Laurence near the conclusion. Another bass feature, at the start of “Canter No. 1”, sets up the tune for its initial cantering, due to evolve, behind Sulzmann’s powerful solo, into full-fledged gallop.

“The Long Waiting”, which Kenny previously recorded in a big band version, seems ideally suited to the quintet. This version conveys the atmosphere of austerity and openness that Wheeler liked so much, a beautiful melancholy expressed so very well in the solos of Parricelli and Sulzmann and in Kenny’s own vulnerable solo.
*
Kenny Wheeler (1930-2014) was an unassuming giant of modern jazz, a daring improviser, and a writer of many beautiful and slyly unorthodox tunes. His recorded legacy on ECM includes albums now regarded as contemporary jazz classics, such as Gnu High, Deer Wan, Music For Large And Small Ensembles and Angel Song.

Born in Toronto but based in England from 1952, Wheeler was, by the late 1960s, a highly regarded figure on the London scene, living a sort of double life – as a post-bop trumpeter and flugelhorn player inspired by Clifford Brown and Art Farmer and as a pioneering free player moving into unexplored territory in the company of improvisers including John Stevens, Evan Parker, Dave Holland and Derek Bailey. Jazz tradition and free experimentation would intermingle in Kenny’s palette as player and composer. As he put it, “the free stuff relaxed my conventional playing and the conventional playing gave shape to my free soloing”, and ideas discovered in improvising, especially a fondness for intervallic leaps, were subsequently deployed in his pieces. He cited Duke Ellington, Gil Evans and Stan Kenton as formative influences on his writing but also listened closely to classical and contemporary composition. Gesualdo, Debussy and Hindemith were favourites. Wheeler often said that Hindemith’s harmonies reminded him of McCoy Tyner. In his own writing, melody was the core, and he always found new ways to frame it, harmonically and rhythmically. In terms of emotional atmosphere, he found melancholy cheering. “Sad music makes me feel happy”, he said. “My favourite people in jazz are the ones who sound a bit sad. Billie Holiday, Miles Davis.”

Wheeler first came to ECM’s attention in 1970 when Chick Corea told Manfred Eicher to check out the soulful trumpeter then playing in a Hamburg workshop band. In 1975 Eicher invited Wheeler to New York for the recording of Gnu High, a now-legendary session with Keith Jarrett, Dave Holland and Jack DeJohnette. The album brought Kenny international press attention and recognition as more than a musicians’ musician. It was followed by many other ECM sessions: as a leader of his ensembles small and large, as a co-leader with John Taylor and Norma Winstone in Azimuth, as a member of Dave Holland’s Quintet, and as sideman or guest with John Abercrombie, Pierre Favre, Bill Frisell, Arild Andersen, George Adams, Rainer Brüninghaus, Ralph Towner and Leo Smith. He was also heard in the freewheeling contexts of Alexander von Schlippenbach’s Globe Unity and the Berlin Contemporary Jazz Orchestra – both of these adventurous big bands included Kenny Wheeler compositions in their respective repertoires.
*
Songs for Quintet was recorded at Abbey Road Studios in December 2013, and produced by Manfred Eicher and Steve Lake. The album is issued on January 14th, 2015, which would have been Kenny’s 85th birthday.

Kenny Wheeler (composer)More information
01-01-2015 Jazzmozaïek
""The music itself, surely has overloaded us with a good feeling.""