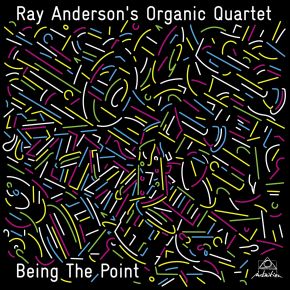 A resilient person par excellence who keeps bouncing back, who continues as ever to move through the winding paths of music business in 2015 with the same curiosity as always, taking on a number of projects untiringly and full of vitality and feeding his status as perhaps one of the most interesting, versatile jazz trombonists living todaym the trombonist Ray Anderson has now prepared a new sound and style menu: Ray Andersonʼs Organic Quartet.
It corresponds completely to an early gustatory impression. "In 1964, in other words when I was 12, I heard 'Back at the Chicken Shack' by Jimmy Smith for the first time. The sound of the Hammond organ electrified me so much that I had the urgent desire to play in such a band starting from that moment. However, it wasn't until 1998 that I founded the Lapis Lazuli Band with Amina Claudine Meyers on the organ." Another 17 years later, Anderson believes it is now time to put the instrument he so admires completely in the center of a band Authenticity is richly provided. No one less than Gary Versace plays the organ, the rising star per se on the 91 synchronously driven gearwheels picked up electromagnetically on the Laurens Hammond, who has played alongside of John Scofield, John Abercrombie, Al Foster, Regina Carter, Maria Schneider, Madeleine Peyroux and Matt Wilson. Steve Salerno (Jaco Pastorius, Bennie Wallace, Time Berne, Peter Erskine and Kenny Wheeler), a guitarist with a great reputation, provided the icing on the cake for the classic Hammond sound. Even the dominant father figure Jimmy Smith hangs over the Organic Quartet in the person of his nephew Tommy Campbell on drums. Ray Anderson has long been friends with Campbell, who already played the drums for Dizzy Gillespie when he was a young man. This resulted in extremely fruitful collaborations in the Lapis Lazuli Band and the Alligator Band
"Being The Point" reveals itself as a paintbox full of sounds, as a homogeneously conceived relationship between four musicians, in which the organ represents the perfect vehicle for the late realization of Ray Anderson's dreams as a young man. It is a sign of life on top of that from a musician, without whom jazz in the 21st century would certainly be a lot poorer.

Ray Anderson (artist)More information
Ray Anderson's Organic Quartet (artist)More information
Ray Anderson (composer)More information
22-07-2015 wegotmusic.de
""Being the Point is full of beautiful sounds. Ray Anderson here unfolds a wide range of styles and moods. A successfull production.""
05-07-2015 Radio Dreyeckland
""Being The Point proves to be a paintbox full of sounds, a homogenously designed quartet where the organ is the perfect vehicle for the late realisation of Ray Anderson's youthful dreams.""
01-06-2015 Jazzpodium
""The music, that Ray Anderson plays together with the Organic Quartet, can always change and refine itselfe. It also has the potential to gain more and more depth. The Organic Quartet is for Ray Anderson the perfect formation to display everything that he has learned in his life so far, both stylistical and instrument wise." "
18-05-2015 Fono Forum
""Ther is nothing more to wish for. With Latin Jazz detours, ballads, dynamic themes and an exciting groove, Anderson & Co create a modern version of organ-combos that were popular in the 1960ths."
Music 4 stars
Sound 4,5 stars"

07-05-2015 Jazzthetik
""Rarely Ray Anderson has sounded so relaxed and his new band wallows in southern soul-sound, that crackle full of expressiveness."
4 stars"

04-05-2015 Jazzpodium
""...Ray Anderson impressively demonstrated his joy for playing and his skills on this CD.""
04-05-2015 Stereo
""With Latin Jazz, ballades, originals and an exciting groove, Anderson & Co create a modern version of the popular organ combos from the 1960ths."
Music 4/5
Sound 3,5/5"
27-04-2015 Jazzflits
""Through the music glitters the infectious homor and incorrigible optimism of a true trombone author."
"
28-03-2015 Berliner Zeitung
"Ray Anderson does not imitate - with his mixture of motown and avantgarde, congo squares and hardbop, blues and great black music he creates a musically attitude that confinces with very current transformations."
23-03-2015 Jazzthing
"The astonishing thing about this record is not only the variety of influences but the impressive logic that the old fox uses to combine all of them without loosing himself."