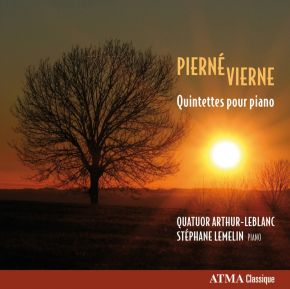 • As part of the series Musique française : Découvertes 1890-1939, with pianist Stéphane Lemelin, ATMA Classique presents the Piano Quintets by French composers Louis Vierne and Gabriel Pierné. Pierné left 20 or so works of chamber music, including the Quintette en trois parties Op. 41, in E minor, for piano and strings, composed in 1916-17. This piece was dedicated to Gabriel Fauré, and premiered at the Société nationale de musique on February 22, 1919 by the Quatuor Bastide, with Gabriel Pierné on piano.
• In 1918, devastated and enraged by the death of his son, Louis Vierne wrote to his friend the organist Maurice Blazy: “I’m developing, as an ex-voto [a votive offering], a quintet of very large scale through which will flow abundantly the breath of my tender affection and the tragic fate of my child. Composed in Switzerland in 1917-18, the Quintette was premiered on April 23, 1920 at the Geneva Conservatory, with the composer at the piano.
• Pianist Stéphane Lemelin is well-known to audiences throughout Canada and regularly performs in the United States, Europe and Asia as soloist and chamber musician. He is director of the French music series “Découvertes 1890-1939” on the ATMA Classique label, dedicated to the rediscovery of neglected early twentieth-century French repertoire and for which he has recorded works by Samazeuilh, Ropartz, Migot, Dupont, Dubois, Rhené-Bâton, Rosenthal, Alder, Lekeu and others.
• The Quatuor Arthur-LeBlanc is widely recognized as one of Canada’s finest string ensembles. As of September 2005, the QAL proudly assumed the role of quartet-in-residence at the Université Laval in Quebec City.