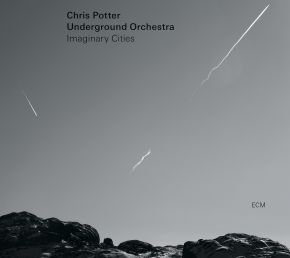 Imaginary Cities is the recording premiere of saxophonist Chris Potter’s new Underground Orchestra. At the core of this larger ensemble is the personnel of his long-established Underground quartet – with Adam Rogers, Craig Taborn and Nate Smith – now joined by two bassists, a string quartet, and Potter’s old comrade from Dave Holland Quintet days, vibes and marimba man Steve Nelson. The title composition is a suite, panoramic in its reach, with movements subtitled “Compassion”, “Dualities”, “Disintegration” and “Rebuilding”. The scope of the work, and its contrasting moods and thematic development, inspire some of Potter’s finest playing. His saxes fly high above his idealized cityscapes or launch into dialogues or group improvising with its gifted inhabitants. Four further pieces – “Lament”, “Firefly”, “Sky” and “Shadow Self” – extend the feeling of the suite, successfully combining both tightly written material and very open areas involving all members of the orchestra. References are multi-idiomatic and multicultural, and Potter, who counts Charlie Parker with Strings amongst his formative enthusiasms, had Arabic and Indian string sections in mind, as well as contemporary composition, when shaping this material. Imaginary Cities was recorded in December 2013 in New York’s Avatar Studio and produced by Manfred Eicher. Release of the album is followed by US performances with the Underground Orchestra in New York and San Francisco.

26-02-2015 Jazzenzo
""The impression that it deserves""
22-01-2015 De Volkskrant
""A complex work, where Potter demands the extreme of his orchestra as well as himself.""
21-01-2015 De Volkskrant
""Probably his most ambitiuous album until now."
The core part of the album is constituted by
Imaginary Cities, a suite in four movements. "A complex piece, where Potter asks the utmost of himself and his orchestra.""
20-01-2015 Nederlands Dagblad
""It's special to experience how classical pieces effortlessly change into parts where African rhythms determine the atmosphere.""