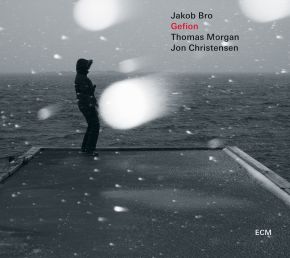 Gefion, named for the Norse goddess associated with ploughing, prophecy and premonition, is the ECM leader debut of Danish guitarist Jakob Bro. Bro first recorded for ECM with Paul Motian on Garden of Eden in 2004, followed by Tomasz Stanko’s Dark Eyes album of 2009. The guitarist’s feeling for melody, sound-colour and atmosphere served him well in those contexts, as it does here in the realization of his own free floating ballads and drifting, spacious-yet-focused pieces. “Lucidity is in the air when guitarist Jakob Bro plays,” the late Danish journalist Ib Skovgaard wrote. “His music transcends genres. It’s beyond categories, a personal music following a track which is consistent with Bro’s constant search for melodic clarity in the songs”.

Gefion was recorded at Oslo’s Rainbow Studio in November 2013 and produced by Manfred Eicher. It introduces a group with US bassist Thomas Morgan and Norwegian drummer Jon Christensen, which has been a priority project for Jakob Bro in recent years. Bro views Thomas Morgan as a “soulmate in music”. As Craig Taborn once said of the bassist, nobody is more rigorous about holding onto the compositional fabric of a piece of music and honouring its intentions. In the stripped-to-essentials context of Gefion, the bassist is able to make his well-chosen notes say a great deal; Bro and Morgan thoughtfully explore the music together, buoyed and stimulated by the lapping waves of Jon Christensen’s drums and cymbals. Whether driving or detailing the music, Christensen plainly relishes the freedoms offered by the trio formation.

“Jon Christensen’s been a big inspiration to me from the beginning of my musical career,” says Bro. “Very early on I played with a Danish drummer who’d been house drummer at Tagskægget in Aarhus - a pendant to Jazz Club Montmartre in Copenhagen –in the 1960s. He was a big fan of Jon’s way of playing the drums, and introduced me to the records he was playing on. I quickly came to recognize how very unique and truly special Jon is.”

Bro first heard Thomas Morgan at New York club Tonic when the bassist was playing with Joey Baron’s band. In the same period, but not in the same line-ups, Bro and Morgan began working with Paul Motian: “Unfortunately we never got to play with Paul, the both of us together. I would have loved that. But around 2008 or 2009 I participated in a recording session in New York with the Danish piano player August Rosenbaum and Dan Weiss. Thomas Morgan was on the session. Since then he has played on almost all of my recordings and we’ve worked and toured extensively together.”

Jakob Bro’s trio with Thomas Morgan and Christensen played together for the first time at the Copenhagen Jazz Festival in 2012. Reviewing the event All About Jazz spoke of “three musicians bringing their very own way of sound making into a realm of listening that builds upon mutual musical confidence”. Subsequently the group has toured widely in Europe and Japan, and Gefion is launched with a further round of concerts in Denmark and a gig at Berlin’s B-Flat club. In April the trio plays in Portugal and at the ECM Label Night at the Jazzahead trade fair in Bremen. In July, Bro/Morgan/Christensen will perform at some of the summer jazz festivals; details soon at www.ecmrecords.com and Jakob’s web site www.jakobbro.com. In May, Bro and Morgan tour Iceland, the Faroe Islands, Norway, Denmark and Greenland with Jakob’s Balladeering project featuring Bill Frisell and Lee Konitz. And in autumn 2015 the Bro/Morgan/Christensen Trio returns to Japan.
*
Jakob Bro, born 1978, studied at Denmark’s Royal Academy of Music, Boston’s Berklee School and the New School in New York. He is a former member of Paul Motian’s Electric Bebop Band and continues to play with the Tomasz Stanko Quintet alongside his projects as bandleader. His own albums to date have featured an exceptional cast of musicians including Lee Konitz, Bill Frisell, Paul Motian, Kenny Wheeler, Paul Bley, Chris Cheek, Thomas Morgan, Ben Street, Mark Turner, Craig Taborn, Kurt Rosenwinkel, Andrew D’Angelo, Chris Speed, George Garzone, Oscar Noriega, David Virelles and others.

Thomas Morgan, born 1981 in California, is one of the most sought-after creative bassists of the present moment. He appears on ECM recordings with Tomasz Stanko’s New York Quartet, the trios of pianists Craig Taborn, Masabumi Kikuchi and Giovanni Guidi, David Virelles’ Mbókò project, and the John Abercrombie Quartet.

16-03-2015 Jazzism
"Interview Jakob Bro: "The Danish guitarist Jakob Bro can be counted to the circle of international top musicians."
"