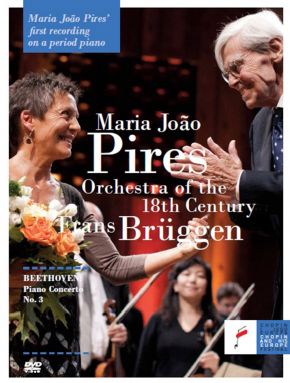 We do not know when exactly Beethoven composed his Piano Concerto no.3, however we know its core was certainly written during the period 1799-1802, at a time that was characterised first by a distinct creative crisis and then by its effective surmounting. Beethoven revolutionised his creartive process. He decided thet henceforth his compositions would be called into being through a long and laborious process of creating countless pre-initial, initial sketches, etc. and that the element of spontaneity would be significantly reduced. The Piano Concerto no.3 is one of the first works to have been written in accordance with that modus operandi.
The film The Breath of the Orchestra, shot during the 9th International Music Festival ‘Chopin and his Europe’ in 2013, represents an attempt to create an intimate portrait of one of the greatest phenomena of the global music scene, the Orchestra of the 18th Century. It’s a very special film of both documentary and emotional value. Pieced together from conversation with Frans Brueggen, Sieuwert Verster (managing director) and musicians who have belonged to the orchestra during the years, as well as recordings from rehearsals and concerts, it conveys the unique ambiance of the work and friendship of this exceptional group of people, bound by their passion and joy in experiencing music together.

Orchestra of the 18th Century (orchestra)More information
01-09-2015 Piano News
"Peerless listening experience"
12-06-2015 Volkskrant
""The truth is that I can't stop. Being a musician is not a profession, it is a mission."

"The Portuguese Maria João Pires (71) rather shows her listeners mercy than technique."