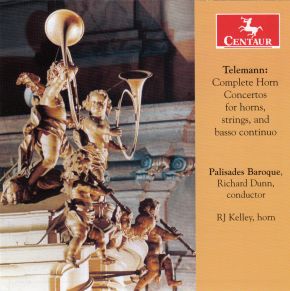 In September 2013, in NYC, Richard Dunn conducted the Palisades Baroque in all nine Telemann concerti for horn(s) and strings, with soloist R. J. Kelley performing on a baroque horn. Many of Telemann’s horn works are a kind of hybrid. Some, called 'concerto,' show elements of a suite, while some show elements of both chamber music and orchestral music at the same time. In their selection, they included TWV 43:F8, a composition resembling chamber music but with a solo-tutti indication, and excluded others called 'concertos', but in reality are either a suite concertante or chamber music.