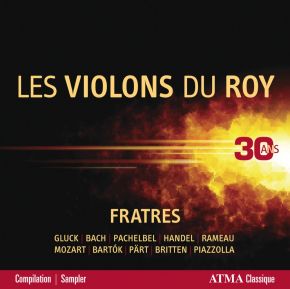 To celebrate the 30th anniversary of the Les Violons du Roy founding, ATMA Classique presents a sampler disc comprising recordings made during the long, fruitful collaboration between the orchestra and the ATMA label, including a hitherto unreleased recording, made in 2008 under Jean-Marie Zeitouni of Arvo Pärt’s Fratres. Bernard. Labadie brought Les Violons du Roy and its the fifteen member core together in 1984. The ensemble specializes in the vast repertoire of music for chamber orchestra, and regularly delves into the repertoire of the 19th and 20th c.