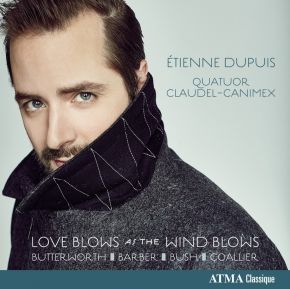 Love Blows as the Wind Blows

George Butterworth’s moving cycle Love Blows as the Wind Blows lends its title to the solo debut album of Canadian baritone Étienne Dupuis. He also sings a rarely recorded English song cycle, Farewell Earth’s Bliss, by British composer Geoffrey Bush, and Dover Beach, an early work by Samuel Barber. This exquisite and refined program concludes with four French songs by Canadian composer Réjean Coallier based on poems by Sylvain Garneau. Dupuis also performs the iconic Irish folk song Danny Boy, arranged for voice and string quartet. Musicians of the Quatuor Claudel-Canimex, who play Barber’s famous Adagio in its original version for string quartet, accompany Mr. Dupuis. Étienne Dupuis has been receiving international acclaim since his debut at Deutsche Oper Berlin in 2011 in the role of Zurga in the Pearl Fishers. Recent engagements include Marcello in La Bohème with Vancouver Opera, Figaro in Barber of Seville in Avignon and again the role of Zurga with Opé