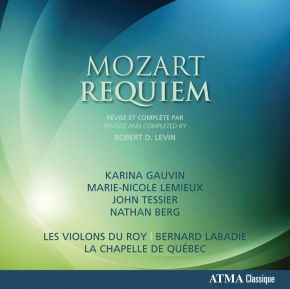 This is an ATMA Classique reissue of one of Les Violons du Roy’s seminal discs: the orchestra’s 2002 Dorian label recording of Mozart’s Requiem as revised and completed by Robert D. Levin. The recording won the JUNO® Award for Best Classical Album of the year in the Vocal or Choral Performance category. Founding conductor Bernard Labadie brought Les Violons du Roy and its the fifteen member core together in 1984. The ensemble specializes in the vast repertoire of music for chamber orchestra, performed on modern instruments but in a stylistic manner most appropriate to the work’s era.