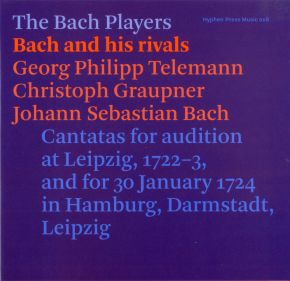 Bach and his rivals

The first CD presents cantatas composed by three of the musicians who auditioned for the position of Kantor at the Thomasschule in Leipzig in 1722–3. The candidates, in order of interview, were Telemann, Graupner and Bach. The cantatas by Graupner and Bach were their audition pieces. Telemann’s audition cantata has been lost; he is represented here by a work known to have been performed in Leipzig in 1725, under Bach’s direction. All three works gain significantly by being set in this context: we hear surprising and forward-looking music by the lesser known Graupner and by Telemann – the most famous German composer of his day – placed alongside a work by the magisterial Bach. An instrumental suite by Telemann provides a substantial interlude.
The second CD focuses on cantatas composed by the three men a year later: 30 January 1724, the 4th Sunday after Epiphany. Telemann and Graupner were back in Hamburg and Darmstadt, and Bach was installed as Kantor in Leipzig. The gospel for the day tells the story of Jesus calming the storm on the Lake of Galilee. These cantatas enact the storm, notably in extraordinary bass arias riding over thrilling instrumental writing. An instrumental suite by Graupner provides further evidence of the qualities of this composer, only now being rediscovered.

Johann Sebastian Bach (composer)More information
07-07-2015 Telegraaf
"The Bach Players give us very pleasurable, healthy performances. No flashy virtuosity, the beauty comes from the inside."
15-05-2015 De Volkskrant
""The Bach Players perform this work in accordance with the most modern insights.""
13-05-2015 De Volkskrant
""Beautiful pieces and harmonies that are almost as spicy as those of Bach.""