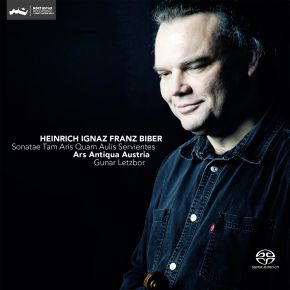 Austrian Baroque music takes centre stage in the repertoire of this unusual Baroque ensemble. The music performed at the imperial court in Vienna at this time was initially heavily influenced by the music of Italy, later by that of France; Spanish court ceremonial also had important artistic effects in Vienna. The typical Austrian sound of this era was characterised by the impact of its many royal domains. The political and societal boundaries of Baroque Austria stretched much further than nowadays. Elements of Slavic, Hungarian and Alpine folk music styles had lasting effects on art music, making up its specific sound. The title “Sonatae tam aris quam aulis servientes” suggests that these works can be used for both sacred and secular purposes. They represent the first of several collections of pieces for polyphonic instrumental ensembles (published in 1676, 1680 and 1682) in which Biber demonstrated his mastery in handling the most important forms of instrumental music of his time.


"
01-11-2015 GRAMOPHONE
"['']...You don't have to listen to all the sonatas at once, of course, though in truth even on repeated listenings the sheer robust joy and commitment of Ars Antiqua's performances are hard to resist...['']"
01-09-2015 Fono Forum
"On the one hand they demonstrate the harmonic abundance in a pleasant-dense ensemblesound, on the other hand they give the spirit wings and take liberties in the soloparts of the violins."
01-09-2015 Luister
""[..]'Ensemble for new baroque music.." "
22-07-2015 klassik.com
""Biber is in the very best hands with Gunnar Letzbor and his ensemble. The extraordinary high-quality sonatas are brought to life by the Ars Antiqua Austria congenial. The Ensemble plays the precious music with a joy for sound, sublte, with confidence and musically strong."
Interpretation 5/5
Sound quality 5/5
Repertoire value 4/5
Booklet 3/5"