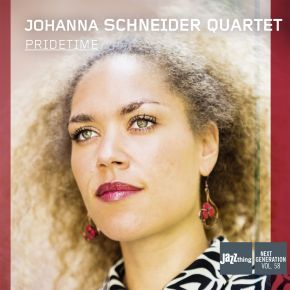 The survival reflex. A bit of swing. . . Oh well, let's just call it groove, catchy, iPod compatible harmonies, with which you can hum along, clever, comprehensible texts, a veteran band and listening hurdles that are not too high. After all, the CD is supposed to sell well and not scare off people even partially interested with the plague and cholera branding "jazz". This path of least resistance provides at least a little bit of attention for every woman with a reasonably pleasant voice who is blessed with good looks. Many talented vocalists, who once began training as jazz singers with big ambitions, are now anchored in the safe harbor of the spirit of the times.

But there are exceptions - thankfully! Johanna is one such exception, who thumbs her nose at the trend to randomness and anonymity in the German vocal jazz scene with courage, perseverance, improvisation pleasure and a refreshing tendency towards perfectionism. When did you last hear a singer scat so wildly in these times of pop-jazz elves, with a distinctive expression almost approaching its own language of art at times. When was there a vocal album recently by a young person, who has dedicated herself completely to jazz and takes every freedom of phrasing, whether in the interpretation of standards or her very personal own songs? "Oliver Hochkeppel asks in the liner notes to Johanna Schneider's debut album" Pridetime," which adds a new, very bright shimmering gem to the successful Jazz thing Next Generation series.

It's a question of her own credibility for the 28-year-old singer who grew up in Bamberg: Do not give way, even if reason offers a different solution, but instead trust your instincts. That's why she left Munich after passing her university preliminary examination in 2009, despite important personal and professional ties. The power woman from the Franconian part of Bavaria met Romy Camerun at a workshop, who teaches the Essen Folkwang University of the Arts. "I knew immediately that I had to study under her," Johanna Schneider recalled. Just a gut feeling. She works regularly as a duo with the pianist from Essen Marc Brenken, was awarded the WDR Jazz Award with the NRW Youth Jazz Orchestra in 2013 and helped to establish the a-cappella female quintet "Cayenne". However, her old Munich quartet still remains her top priority. With pianist Titian Jost, one of her former teachers, bassist Andy Kurz and drummer Bastian Jütte, she has three of the best representatives of swinging jazz in Germany on her side. The fact that the seasoned crew contributes essentially to the unmistakable sound of "Pridetime" goes almost without saying. In addition, Ack van Rooyen and Tony Lakatos enriched two tracks with their thrilling flugelhorn and tenor saxophone solos.

Johanna Schneider already developed the aspiration necessary for such ambitious projects in childhood. Thanks to her single mother, she enjoyed a solid musical education, learned violin and piano as well as ballet dancing. The theater, musicals and training as a speaker followed. Johanna has sung ever since she can remember. She performed with her own band on stage when she was 14 composed her own songs at 16. The very first, i.e., "My Song", now shows up among the twelve songs of "Pridetime", which Johanna either all composed herself or for which created completely new arrangements in the case of her favorite songs "Moon Dance" by Van Morrison, "Throw It Away" by Abbey Lincoln, " Since I Fell For You "by Buddy Johnson," Ater Of March "by Antonio Carlos Jobim and " Turn Out The Stars "by Bill Evans.

As a result, "Pridetime" becomes a journey through a very personal musical experience with unexpected discoveries and very different influences. Melancholic ballads, sizzling swing and African rhythms merge to become a coherent musical language. Johanna is not afraid to cross the Rubicon to the German language either, for example, in "Circus Infinitus" and "Mondgesang". This is because her lyrics are as different as their overall presentation and her CD.

Oliver Hochkeppel calls the extraordinary debut CD of the young singer "A story of self-assertion and the pride to be her own pilot again after many tears." Johanna Schneider can be rightly proud of it. And people can consider themselves fortunate that someone finally remembers the actual goal of the vocal jazz: namely, to enchant.