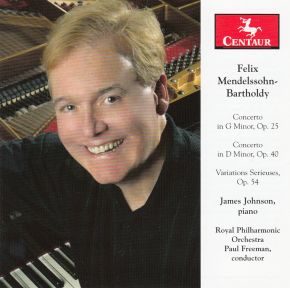 Felix Mendelssohn (1809-47), a musician much-beloved by his many contemporaries in the German-speaking world and beyond, and a composer of consistently pleasing works of often overlooked depth, is given the sole spotlight on these 1978 and 2013 recordings by pianist James Johnson and, in the two piano concerti, Afro-American conductor Paul Freeman and the Royal Philharmonic. The Variations Serieuses, op. 54 is the later recording, is a solo work of considerable virtuosic content.