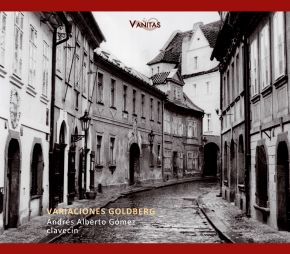 Johann Gottlieb Goldberg (1727-1756) would have never imagined that his name would be linked in history to the Aria and the 30 variations composed by Johann Sebastian Bach and known from the story of Forkel (1802) as the Goldberg Variations BWV 988.
Forkel tells in his story that the Count Hermann Carl Von Keyserlingk (1696-1764), entrusted Bach some “soft and lively” pieces so that his young harpsichordist, J. G. Goldberg, an old Bach´s disciple that lived with Keyserlingk at home, would play them during the shady and long sleepless nights that the Count suffered. Forkel writes: “ Since then, the Count didn´t mention them with another name that his variations. He never got tired of hearing them and during much time, when sleepless nights arrive, he always said the same thing: Come on, my dear Goldberg; play for me some of my variations”. Keyserlingk, extremely grateful, rewarded Bach in a generous way with a gold glass containing a hundred of louis d´or. Undoubtedly, this is a very tender story but actually it´s distant from reality and closer to legend. What is certain is the fact that Bach aspired to the post of composer of the court of the King of Poland and elector of Saxony, and Keyserlingk, who was minister of the elector of Saxony in Dresden and Russian envoy in the court since 1733 at that time, supported Bach´s aspirations to the title. His sponsorship was a resounding success due to the fact that Bach obtained the awaited post in 1736. This fact, as we´ll see later, motivated in Bach the creation of the variations from an aria firstly appeared in the second album for harpsichord of Ana Magdalena Bach, dated in 1725.
Undoubtedly, Goldberg Variations is one of the most fascinating works for keyboard. Despite Bach´s reticence for creating variations due to his always identical harmony, the humble Leipzig´s singer left us a huge art work that catches anyone facing it.