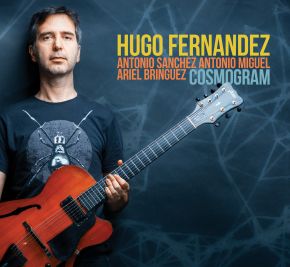 His new CD "Cosmogram" (2015) is his second recording as a leader and shows us his enthusiasm for composition. His music has a broad variety of sounds, from jazz, classical, rock-pop and and an ethnic touch. This stylistic diversity gives us an all-round mood and ambience in his recorded works and live performances.

"I try to detach from conventions about how a jazz quartet should sound...I simply write music that inspires me and try to make it sound the most organic or alive while performing it."

His Quartet is a multicultural group fit to his needs. Great cuban saxophonist Ariel Bringuez (Irakere and Chucho Valdez) has a full and mellow sound of his own, very lyrical and imaginative that can remind us a bit of Joe Henderson and Joe Lovano. Antonio Miguel (Gerardo Nuñez and Benedikt Janhel) is a solid and experienced Spanish bassist, who is first choice to many flamenco and Spanish jazzmen. Lastly, drumming genius Antonio Sanchez (Pat Metheny, Michael Brecker, etc..) brings his arsenal of power, creativity and drive needed to uplift the music.