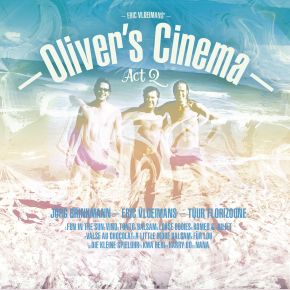 Welcome to Oliver’s Cinema. Please find a seat and make yourself comfortable; Act 2 is about to start.

We’re happy you could join us—tonight’s feature will be a memorable experience that will fire the imagination visually and emotionally as deeply and with as much pull as it does with music. Each performance will offer an evocative blend of sentiment, mood and melody. Expect a distinct, emotional clarity to these virtual landscapes with a minimum of clutter and distraction, and an intriguing range of musical flavors. Some will hear jazz as the primary note, many will mark a variety of classical and folkloric ideas passing through lime welcome visitors, finding a comfortable place within these performances. All will recognize a refreshing originality to Oliver’s Cinema that remains long after the listening, a retinal after-image for the ears and the heart that will stay with you long after the closing credits.

Oliver’s Cinema is a sonic adventure of lasting resonance, a cross-cultural concept, and a trio of unlikely instrumentation. It is a band that suggests a veritable world of sound with nothing more than trumpet, cello and accordion, an ingenuous blend of timbre and texture. The music of Oliver’s Cinema is so naturally effective that it seems to ask why no one has thought of this combination before.

Eric Vloeimans is the classically trained, jazz-infused trumpeter whose penchant for long tones, unhurried lyricism and sudden, vocal-like phrasing imbue his playing with a seasoned wisdom that defi es his years. In his native Holland, he is respected for his recordings and work on film soundtracks, and is celebrated for unusual collaborative projects that convincingly explore the overlap of classical and improvisational music. Anagrammatically and conceptually, he is the leader of Oliver’s Cinema, and as the name suggests, Vloeimans favors interior visualizations with a balance of whimsy and solemnity that serves as this trio’s musical signature. (Often, the cinematic is directly referenced, as here on Act 2 with their pensive treatment of Nino Rota’s 1968 theme from Romeo and Juliet.)

For Oliver’s Cinema, Vloeimans reached across borders—recruiting German cellist Jörg Brinkmann and Belgian accordionist Tuur Florizoone—and formed a team of surprising collusion. Each are melodic masters in their own right; each has learned to expand their musicality with a vocabulary of patience and surprise, light and shade. One measure of their compatibility is the unforced precision of the group’s “rhythm section”— Vloeimans’ tempo shifts, Brinkmann’s pizzicato patterns, Florizoone’s thumb-slaps on the accordion frame. Another can be found in the sonic handoffs from one instrument to the next: a sustained note on the cello echoed by the haunting, string-like sigh from the top end of the accordion; the accordion’s breathy runs replicated on the trumpet.

Act 2 is the second outing for Oliver’s Cinema, an album of performances that are conversations as much as compositions—conversations shared by three old friends sitting around in the fading glow of the evening, friends who know each other almost too well. Their discussions have that ethereal, all-knowing quality and require a soul-stilling level of attention that is worth the time invested and emotional engagement.

So sit back, let go of the day, and enjoy the musical images that are about to flow. Oliver’s Cinema welcomes you. Don’t forget to turn off your phone too—you won’t want to be interrupted.

Ashley Kahn, Grammy winner and author of A Love Supreme: The Story Of John Coltrane’s Signature Album, and other titles on music

Is this a MCH SACD ?

01-06-2015 Jazzthing
""... a bunch of open, easy accessible pieces that seem to have a conversation.""
26-05-2015 Jazzflits
""Vloeimans does what he can do best; letting his sensitive music nesting deep in your soul. The last note of this piece is truly breathtaking." "
20-05-2015 De Volkskrant
""The possibilities of this trio are far from being closed.""
19-05-2015 Jazzenzo
""Oliver's Cinema continues to renew itself and keeps on suprising the listener.""
07-05-2015 Limburgs Dagblad
""Who listens even sharper, hears how ingenious the three meet together and with how much joy for adventure there is played."
"

Friesch Dagblad
""[..]Vloeimans has added both classical and folkloric elements to his jazz. His trio sounds flexible, adventurous and intimate.""