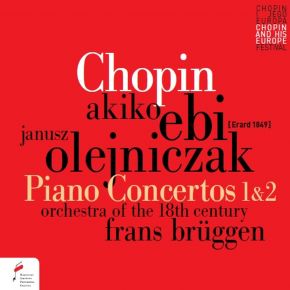 We are delighted to present the next in the critically acclaimed series from the Fryderyk Chopin Institute label celebrating Frans Bruggen's relationship with the Orchestra of the 19th Century.

Chopin’s youth fell during the peak years of brillant music. The style acquired its name only later, from the adjective which at that time was very often attached to the titles of compositions, indicating their scintillating character with virtuosity in rapid scales and passages and a wealth of ornaments features which the pianists of the day loved to dazzle with.

It disappeared just as quickly as it arose, and opinions about it in the later subject literature are generally pejorative. Most of the repertoire in this style quickly fell into oblivion, yet this episode played a crucial role in the history of music. Thanks to the style, brilliant pianistic technique and piano texture flourished, and that proved to be a launch pad for the most magnificent achievements of romantic music in works by composers who succeeded in subordinating virtuosity to the needs of musical expression.

Among their number were three great peers: Schumann, Liszt and, of course, Chopin—one of the few composers to raise the ‘brilliant’ style to the heights of true artistry. Also favourably disposed to that aesthetic, which was close to Classical models but was also considered ‘modern’, were teachers at the Main School of Music in Warsaw, including rector Józef Elsner himself.