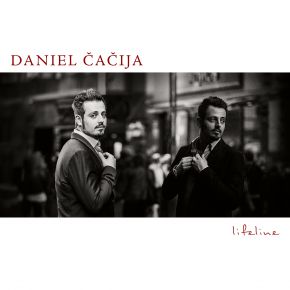 Remarkable young talents are ten a penny in the jazz scene. Each year, excellently trained musicians pour out of the world's music schools and conservatories and find themselves wooing audiences in the real world. Many of them have been born into a musical environment and instinctively feel their way towards their instruments. Some need to take a few detours before they recognize their favourite sounds. It can be a long and winding path, but a handful of artists excel so strikingly within this top tier, that their musical brilliance quickly reaches their audience and meets the highest recognition.
And so it was with jazz singer Daniel Čačija!
Even before the release of his first recordings, the trend-setting US magazine "Down Beat" chose Daniel Čačija as the best young singer of 2013. Then in 2014, he received a Porin Award (a Croatian music prize) in the "Jazz Album of the Year" category for his outstanding interpretive performances.
And now, on MONS Records, Daniel Čačija is laying down his debut album with the significant title LifeLine.
Who is this man? What is he composed of, this artist Daniel Čačija, who soars like a comet through the jazz heavens and captivates people with his voice?
Daniel Čačija was born in 1986 in Croatia. At the beginning of the 90s, his family fled after several months of war and emigrated to Germany. Frankfurt am Main became their new home. Even as a small child, Daniel drifted through a cosmos of church, folk and classical music. Both of his parents and his older brother are active musicians. At just six years of age, he started professional music lessons in Frankfurt, and later received his degree as a classical pianist from the conservatoire.
And the singing? That story is quickly told, and for that very reason, all the more remarkable. Singing had always been a matter of course for Daniel Čačija. His voice accompanied him everywhere, even to his piano rehearsals at the university. Artists such as Nat King Cole, Sarah Vaughan, Mark Murphy, Kurt Elling and Gregory Porter were his secret heroes. But it was a throwaway question by a staff member at the
conservatoire in Frankfurt, who asked whether singing was his main subject, which finally opened Daniel's eyes. From then on he followed his inner voice, in the truest sense of the word!
On LifeLine, Daniel Čačija finally presents this voice on record, and with it gives his musical career the brilliant setting it is due. For Lifeline has become a very personal album.
Stylistically, the album is a veritable explosion of different styles. Yet Daniel Čačija has mastered the fine art of dynamically uniting the arrangement, modulation and interpretation of this almost daring selection of pieces, binding them together as though with an elastic band.
He uses hip-hop with consummate ease on the opener 'No Church In The Wild', and follows it directly with 'Strollin'', a powerful and emotional blues by Charles Mingus. On 'Little Red Rose', he combines self-penned English lyrics with a folk song from the Zagreb area, translating a Slavic melancholy, born of centuries of oppression and persecution, into a hopeful song for today. He is lyricist again on 'Precious Me, Precious You', here over an old Macedonian folk song, where he tackles the theme of the undiscovered and its significance.
There are also pieces from the great Broadway musical tradition (Seesaw), jazz standards (I'm Gonna Lock My Heart, Day In Day Out) and even a soul classic by Donny Hathaway (Someday We'll All Be Free).
The central element, which holds this diversity so brilliantly together, is the renowned authenticity that Daniel Čačija so naturally and effortlessly attains.
LifeLine is the musical autobiography of a young man and artist with an exciting path to follow, and a rocky road behind him. Each path is considered a gift, and a challenge. He has become what he is, both with and through his music, and he gives it back again through his music. Or to put it as Kurt Elling did; "man, people wanna know who YOU are!"
With LifeLine, Daniel Čačija gives his right answer!

Daniel Cacija (artist)More information
01-06-2015 Jazzpodium
""The independent interpretations of classic as well as the remodeled impressions of his former homeland (Croatia) appear convincing and give pleasure.""