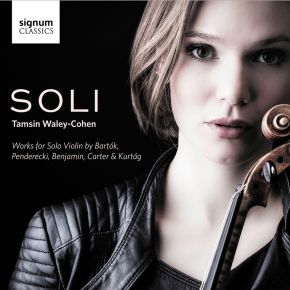 Tamsin Waley-Cohen, a violinist of ‘fearless intensity’ (The Guardian), explores post-1944 solo repertoire, pushing the instrument to its limits on Soli, her new release on Signum Classics. Bartók’s Solo Sonata, an ‘Everest’ of the violin repertoire, sits at the heart of this recording which also includes Krzysztof Penderecki’s Cadenza, and miniatures by Elliott Carter, György Kurtág and George Benjamin. Ms. Waley-Cohen’s adventurous and varied career includes performances with the RPO, LPO and BBC orchestras, conductors Andrew Litton and Tamas Vasary, and an “Artist in Residence” association with Orchestra of the Swan.
Performances have taken her across the UK, Europe, to the USA and the Antipodes. An in-demand recitalist, Tamsin enjoys a successful performing and recording duo partnership with pianist and composer Huw Watkins. Her interest in contemporary music has led to strong relationships with contemporary composers, including Mr. Watkins’, Richard Causton, Joseph Phibbs, and Torsten Rasch.