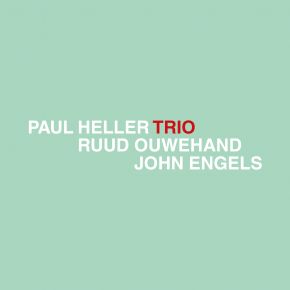 With his new album, the Cologne-based saxophonist and composer Paul Heller proves his nerve when it comes to reduction. The cover is a shade of green over which nothing more than the names of the three musicians and the album title appear in plain, capital letters: TRIO. While Heller is usually to be heard in a quartet, or of course in a bigger line-up as the tenor saxophonist of the renowned WDR Big Band in Cologne, this time he presents himself within an intimate trio.
For this project, he has picked out two well-known representatives from the Dutch scene. Ruud Ouwehand is a sensitive bass player, who not only provides a solid foundation, but also smooths the way for the lively interactions of all involved. John Engels, who celebrates his 80th birthday this year, has for decades been counted among the most renowned in his field. Many well-known jazz musicians, such as Ben Webster or Chet Baker, appreciate and value his precise and imaginative drumming. John Engels' circle of admirers also includes Paul Heller, who has worked with him repeatedly in the past. Heller, suitably thrilled, commented on the musicians on his new trio album: "Engels has a drive, a sound, a liveliness and an insane spontaneity which is completely unique. Ruud Ouwehand is a fantastic bass player who totally understands John Engels, and who has also worked with an impressive line-up of musicians, for example, Ferdinand Povel, Chet Baker and Archie Shepp."
Paul Heller was also guided by the idea of simplicity in the selection of the pieces. Alongside some classic jazz standards are two original compositions by Heller, as well as a few exotic numbers. As an example, Heller chose a Finnish folk song that he had got to know several years earlier on a production with the WDR Big Band. What all the pieces have in common is their "simple" musical structure. This is because Heller wanted to avoid having to rehearse overly complicated, newly written music. Instead, all of their energy was to be directly invested into the tunes' expression.
And where could such a personal project be better realized than in a private atmosphere? For Paul Heller, it was clear from the first moment onwards that an anonymous studio somewhere was out of the question. So, they met in John Engels rehearsal room in his house in Amsterdam. Even though the basement was only a few square meters in size and was crammed to the ceiling with records, musical instruments and posters, it offered the ideal habitat for their venture. "In this way a very special, intimate and personal mood was created, which I think can be easily heard on the recordings. And the sound engineer Stefan Deistler has done a fantastic job in recording the music so naturally and lively in this special environment."

Through this closeness, every tone from the three musicians could be directly breathed in and processed, without any loss in transmission. And this closeness,
warmth and intensity can be heard on all of the eight pieces on Paul Heller's new trio album.

01-10-2015 Jazzmozaiek
"4****
"No far fetched complexity, and certainly no easy listening; Heller uses apparently inconsiderate, the whole register of his instrument, with a vocal, plastic sound."
"
01-06-2015 Jazzpodium
""Paul Heller's highly varied variations move between serene-calm, very melodical parts and highly rapid, technically brilliant and harmonical wayward, imaginative runs.(...) a magnificent CD.""
01-06-2015 Jazzthing
""No picture-bumbling, no detours, no lavaish arrangements (...) This is beautiful, a really fulfilled weekend.""
Villa d'Arte
""This sounds like a sparkling live concert in something like Het Bimhuis, but in intimate acoustic conditions. Amazing!" "