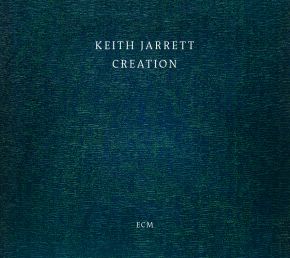 Creation signals a departure from the ‘traditions’ of Keith Jarrett’s many ECM recordings of solo improvised piano. Earlier concert recordings have reflected the flow of musical ideas and inspirations as developed in the course of an evening (as on The Köln Concert, Paris Concert, Vienna Concert, Rio etc.) or several evenings (Bremen-Lausanne, Sun Bear Concerts, Testament etc.) Creation – drawn from concert recordings made in Japan, Canada and Europe in 2014 – is different.

After reviewing all the music from his 2014 performances, Keith Jarrett honed in on the most revelatory episodes from six concerts in Toronto, Tokyo, Paris and Rome and sequenced them, effectively creating a new concert, a new suite of pieces with its own inner logic and momentum. The concept opens up fresh possibilities, extending the improviser’s art to include an intuitive reassembling of material. The resultant album is perhaps the most strongly lyrical of Jarrett’s recent solo releases, the choice of music emphasizing pieces in which there is a sense of song being born, voices striving to be heard. Creation also offers the most up-to-the minute account of Jarrett’s uncanny capacity to construct compelling music in real-time: his melodic-harmonic imagination as an improviser and his ability to consistently find and shape new forms remain, after all these years of solo concerts, remarkable.

The album begins with music from Toronto. Paul Wells of Canadian national news magazine Maclean’s, reviewed the concert at the Roy Thomson Hall, concluding that “Jarrett matters because he possesses the improviser’s secret to greater degree than almost anyone. He can spin melody and logic, structure and surprise, richly and indefinitely.”

Three of the improvised pieces sequenced here – Part IV, Part VII and Part VIII – are from a concert Jarrett gave at Rome’s Auditorium Parco della Musica on July 11, 2014. Jarrett returns to Italy on May 18, to play a solo concert at Teatro San Carlo in Naples.

On May 22nd Keith Jarrett performs at the KKL Hall in Lucerne, Switzerland.

Keith Jarrett (artist)More information
26-06-2015 Trouw
"5*****
Headline: “Hold your breath and listen”
“[…] every time he finds another move that the listener will not expect at all, and he himself did not expect. Only one such move is in itself a miracle, but 'Creation' is just full of them.”

01-06-2015 Jazzism
""It is composed or improvised? It is jazz or classical? These are questions that don't matter at Keith Jarrett. It is especially very nicely played.""
26-05-2015 Jazzflits
"Jazzflits: BESTSELLERS JAZZ CENTER "
22-05-2015 Jazzenzo
""His message seems to be that communication through the most abstract art form, namely music, not only needs to be done within the lines of conventional roads.”"
10-05-2015 Erickorsten
""The jazz giant – but also a classical pianist (Bach, Barber, Handel, Mozart, Sjostakovitsj) – knows as no other how to really master technical virtuosity and to link it to moments of simple, infinite lyrical beauty.""
08-05-2015 Cobra
""The virtuoso pianist is a phenomenon, at home in jazz and classical, and an example for many generations after him.""
06-05-2015 De Standaard
""Creation needs an atmosphere that fits with night musings and deep romance." "