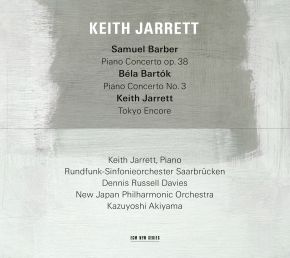 For much of the 1980s, Keith Jarrett balanced his improvisational activities with performances of classical music and contemporary composition. On this disc, with concert recordings from 1984 and 1985, he is heard playing Samuel Barber’s Piano Concerto op. 38 and Béla Bartók’s Piano Concerto No. 3, and rising to the challenges of these major works. The New York Times praised Jarrett’s playing of the Barber with Dennis Russell Davies in this period (“a sinewy, vigorously lyrical performance … both sensitive and strong”), and the Bartók with Kazuyoshi Akiyama was most enthusiastically received in Japan. After the Tokyo Bartók performance Jarrett returned alone to the stage of the Kan-i Hoken Hall to play a touching improvised encore, also documented on this recording. The album includes liner notes by Keith Jarrett and Paul Griffiths. (This historical album of music by Barber, Bartók and Jarrett is one of two albums issued on May 8th, Keith Jarrett’s 70th birthday, the other album being Creation with new recordings of improvised solo piano.)

"'Nothing but a dream', his own improvisation to close the program, is so totally Jarrett and in other words totally cool"

[''].. 'Nothing but a dream' finally, a personal improvisation and an on his game Jarret, and it's cool."
"

22-05-2015 Jazzenzo
""His message seems to be that communication through the most abstract art form, namely music, not only needs to be done within the lines of conventional roads.”"
08-05-2015 Cobra
""The virtuoso pianist is a phenomenon, at home in jazz and classical, and an example for many generations after him.""
07-05-2015 Het Parool
""Jarrett uses the fortes to give it a serious bang. Beautiful is the improvised encore.""