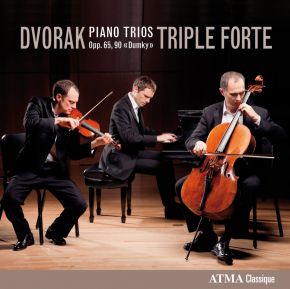 This recording features Triple Forte in two carefully paired works by Dvořák: the Piano Trio No. 3, Op.65, and the Piano Trio No. 4, Op. 90, “Dumky”. They occupy significant places in the Czech master’s opus, each illustrating a distinct aspect of this great melodist’s vision and artistic inspiration.

Triple Forte brings together three of Canada’s most prominent soloists. Violinist Jasper Wood, cellist Yegor Dyachkov and pianist David Jalbert have joined forces to create a sought-after piano trio that has captured critics’ and audiences’ attention with their passion, intelligence and sensitivity, not to mention the sheer joy that they bring to the stage: “This was a splendid concert. I’d miss sunshine, football or Santa for music like this any day.” (The Globe and Mail).