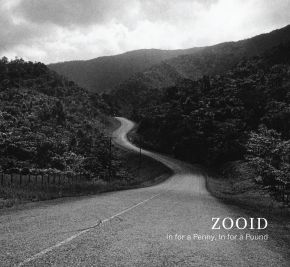 In for a Penny, in for a Pound

Composer, saxophonist and flutist Henry Threadgill is widely considered to be among the most influential artists in jazz. The New York Times called him "one of the most thrillingly elusive composers in and around the jazz idiom: a sly maestro of unconventional timbres, bristling counterpoint and tough but slippery rhythms." His music for his band Zooid is no less than his attempt to completely deconstruct standard jazz form – to steer the improvisatory language away from chord changes, scales, or free improv to an entirely new system based on serial interval blocks. His compositions create a platform that encourages each musician to improvise with an ear for creating counterpoint while buoyed with complex, overlapping rhythms.
“In for a Penny, In for a Pound” is a large piece featuring a short introduction and exordium (“In for a Penny, In for a Pound” and “Off The Prompt Box”) and four longer pieces written specifically to feature each of the musicians in Zooid: “Unoepic” for guitar, “Tresepic” for trombone/tuba, “Ceroepic” for Drums/Percussion and “Dosepic” for cello. Threadgill’s own alto saxophone, flute and bass flute is woven through the other four sections, thus a creating a fifth epic.
Zooid is certainly the only group currently able to perform these compositions since they involve a wholly different way of engaging in group improvisation. Thoroughly attuned with each other after being together for over 14 years, the band continues to provide Threadgill with the foundation to expand on his ever evolving musical inspirations.