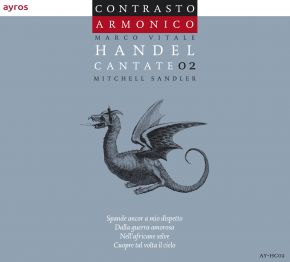 This project is the continuation of the ‘Handel Complete Cantatas’ series appeared recently on the market with four volumes issued. This is the second volume presented by the ayros recording label, as continuation of the series . This CD features the bass-baritone Mitchell Sandler, who worked in other CD productions of Contrasto Armonico (Aci, Galatea e Polifeo & La Resurrezione). The CDs contains also two trio-sonatas by Arcangelo Corelli.

Georg Friedrich Händel (composer)More information
Contrasto Armonico (orchestra)More information
27-06-2019 Stretto
""Contrasto Armonico" records Handel's complete, Italian cantatas, magnificent compositions with instrumental accompaniment by an ensemble, or only with basso continuo. An ambitious project from Ayros."
Gramophone Magazine
"Contrasto Armonico group together all four of Handel’s Italian cantatas for solo bass voice. A speculative hint of the context of the conversazioni hosted by the luminaries of the Roman Arcadian Academy is provided by two trio sonatas from Corelli’s Op 4. Mitchell Sandler sings with a perfectly shaded mixture of power and melancholic sensitivity, his vocal phrasing neatly dovetailing with the contrapuntal eloquence of the three violins and cello. The poetry in Dalla guerra amorosa (also probably written in Rome) compares Cupid’s shenanigans to warfare; the wistful observation that beauty is a flower that languishes and fades features judiciously realised accompaniment by harpsichordist Marco Vitale (‘La bellezza è com’un fiore’).
The other two cantatas were both written in Naples in summer 1708, probably for the same phenomenal bass who sang the murderous cyclops in the contemporaneous serenata Aci, Galatea e Polifemo. Sandler is obliged to navigate sudden dramatic contrasts, vivid imagery and wide leaps across a range of more than two and a half octaves (from a low C sharp to a high top A) inNell’africane selve – no mean feat when the instruments are tuned to low ‘Roman’ pitch; he comes closer to dealing with the phenomenal demands of Handel’s writing during the sorrowful ‘Langue, trema, e prigioniero’ than many – and Pierre-Augustine Lay’s astutely melodic cello plays a crucial part in weaving musical coherence that has eluded many other performers of this notorious cantata. Cuopre tal volta il cielo is almost as extreme in its tempestuous imagery. Hitherto none of the handful of recordings that group together all four of Handel’s bass cantatas has managed to maintain the musical sophistication achieved consistently here.
"