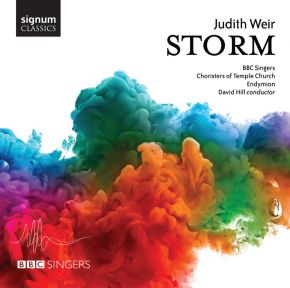 The BBC Singers continue their critically lauded and award-nominated series of composer-led recordings with a new disc of works by Master of the Queen’s Music Judith Weir. Recorded in the unique acoustic of the Temple Church, London, the BBC Singers are joined by the church’s choristers and the contemporary music ensemble Endymion in a retrospective of Weir’s works drawn from a 25-year period. Among Ms. Weir’s many achievements are the many staged performances her operas have received in the UK, Germany, Austria, the Netherlands, Belgium and the USA, as well as numerous commissions