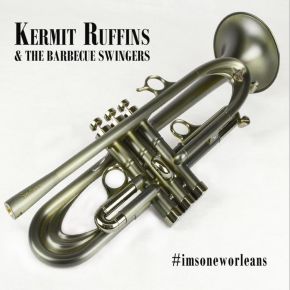 Beloved New Orleans trumpeter and vocalist, Kermit Ruffins, returns proclaiming his love and pride for his hometown with #imsoneworleans out April 21, 2015 via Basin Street Records.
Good times and a carefree attitude permeate this collection of originals and covers that features The Barbecue Swingers, Kermit's regular gigging band, for the first time in over a decade.
The album pulls from various styles including New Orleans classics like "Jock-a-Mo (Iko Iko)" and "Tipitina," vintage Kermit Ruffins originals from his time with Rebirth Brass Band like the Caribbean-tinged "Mexican Special," and a two-part title-track, an homage to the city he loves so dearly replete with dedications to music legends and anecdotes about his life growing up in the Big Easy.
In addition to expressing his love of New Orleans, Kermit also wanted to showcase two special guest vocalists--Nayo Jones, a regular featured guest at Kermit's live shows, belts her way through Etta James' "At Last," and introducing Kaylin Orleans Ruffins, Kermit's youngest daughter, in a heartfelt duet with her dad on "Somewhere Over the Rainbow."