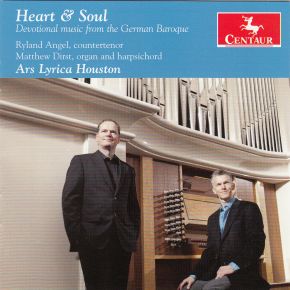 In the time of J.S. Bach, religion in general, and devotional music in particular, were a far more embedded and important aspect of people’s everyday lives, and the number of composers needed to meet the demands of the many church services was considerable. Heart & Soul: Devotional Music from the German Baroque, casts light on some of the more important but also more, varyingly obscure figures providing the music necessary, excluding Bach himself but inclusive of a great uncle, Johann Christoph, as well as Buxtehude, Scheidt and others than active. Founded in 1998 by harpsichordist and conductor Matthew Dirst, Ars Lyrica Houston is an ensemble dedicated to high caliber, historically-informed performances of 17th-18th c. music. Since 2000 Houston’s classical music scene has expanded significantly; the organization’s growing list of commercial recordings have earned a Grammy® nomination and have brought international attention to Houston as an early music center. The British counter-tenor Ryland Angel has built an international reputation on both the opera and concert stage, in repertoire ranging from the Baroque to new operatic commissions. “His voice … cradle one’s self in this delicious sound to imagine how the songs of the heavenly cherubs expressed similar enchantments.” (Opera Magazine)