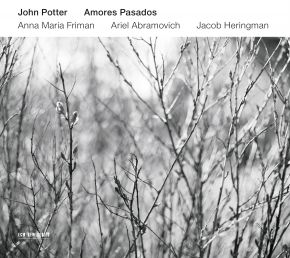 “A hundred years ago, a song was just a song – it belonged to whoever sang it while they were singing it. Any music could be ‘popular’ music, with barrow boys whistling Verdi arias in the street,” writes vocalist John Potter in the liner notes to his newest ECM recording, Amores Pasados. Yet, as he points out, there eventually became a category of “art song,” as distinct from popular and folk song; the advent of radio and recordings brought professional interpreters of those art songs, superseding amateur singers gathered around a piano with Schubert sheet music in hand. As the 20th-century wore on, the opposite of art song became known as the “pop song,” with purveyors of the latter often singing the songs themselves, blending original lyrics with their music. With Amores Pasados, Potter aims to refract the concepts of art song and popular song through a double prism. Along with interpreting folk-inflected songs by composers from the Renaissance to the 20th century, he performs art songs written by English artists known for their feats in popular music: John Paul Jones (of Led Zeppelin fame), Genesis keyboardist Tony Banks and Sting.

Potter – an ECM veteran from his decades as a tenor with the Hilliard Ensemble and, more recently, with his Dowland Project recordings – arranged the songs of Amores Pasados with lutenists Ariel Abramovich and Jacob Heringman. Adding her pure voice and hardanger fiddle to the session at Oslo’s Rainbow Studio was Anna Maria Friman of Trio Mediaeval (the vocal group that Potter has mentored, supervising its ECM recordings). Reflecting on the material of Amores Pasados, Potter writes: “We asked John Paul Jones, Tony Banks and Sting to write us lute songs. Asking a rock-music composer to set existing poetry within a genre we knew well meant that we singers wouldn’t need to pretend to be pop singers – we were still ‘interpreting’ a text in a way that we’re familiar with… None of these songs found their final form until we reached the studio, where Manfred Eicher, as ever, sculpted their final shape.”

John Paul Jones composed the album’s title work, a dark-hued trio of songs – “Al Son de los Arroyuelos,” “No Dormía” and “So ell Encina” – set to poems from three great ages of Spanish literature. Potter says of the Led Zeppelin multi-instrumentalist: “As a bass player, he was able to appreciate the direct connection between rock music – with harmonies often improvised spontaneously from bass lines – and the 17th-century ‘continuo’ principle, which works in the same way.” About these three beautiful, often dramatic pieces, Potter adds, “Are these pop songs or art songs? The Arvo Pärt-like sparseness of ’No dormía’ defies categorisation.”

Potter describes the progressive rock written by keyboardist Tony Banks in Genesis as characterized by “harmonic quirkiness and structural complexity.” Banks’ lyrically emotive songs for Amores Pasados re-set the words of two 17th-century lute songs, “Follow Thy Fair Sun” and “The Cypress Curtain of the Night,” by English poet-composer-theorist Thomas Campion, a Renaissance contemporary of more famous lute-song artisan John Dowland. For comparison, Potter and Friman also sing Campion’s stately originals on the album, as well as his “Oft Have I Sighed.” An even older piece, an “In Nomine” in two versions (and six time signatures), serves as an interlude for lutes; it’s the only known work by one Mr. Picforth, a 16th-century musician whose surname is virtually all that is known about him.

Sting (born Gordon Sumner) has chased a restless muse from young jazz bassist to rock singer with the Police and far beyond in his solo career, even learning how to play the lute by dint of his interest in Dowland as begetter of the English singer-songwriter tradition. He sang the Elizabethan’s lute songs for a Deutsche Grammophon album, a labor of love for a pop star. Sting originally wrote the words and music to the haunted “Bury Me Deep in the Greenwood” for a film version of Robin Hood. The song’s sound and sensibility obviously “come from a composer who performs Dowland,” as Potter notes.

Serving as a fulcrum between the ancient songs and the newly written on Amores Pasados are two pieces – “Sleep” and “Oh, Fair Enough Are Sky and Plain” – from the early 20th century by a pair of British composer friends: Peter Warlock (born Philip Heseltine) and E.J. Moeran. Potter, Abramovich and Heringman freshly arranged these melodious songs for two lutes, with each sounding very natural in the guise. Potter says: “These two composers briefly shared a house in the 1920s, and both were very familiar with Renaissance lute songs. Heseltine could read lute tablature, but no one in the ’20s owned or played a lute.”

Potter sums up the album’s toggling between eras and traditions thusly: “What we aimed to do in this recording is bridge the gap between art song and pop song. We’ve tried to make it as live as possible and have left in some of the inevitable glitches that are part of what make a performance human. I suspect that when media theorist Friedrich Kittler wrote that a recording was a photograph of the soul, he was talking about songs.”