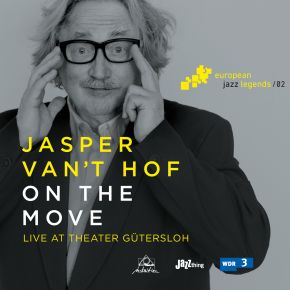 "I said to myself at the Festival in Roermond in 1968 that I would try it again with music for one year. And I'm still stuck in this year ... " Jasper van't Hof liked this quote from his portrait in the series" European Jazz Legends" so much that he immediately shared it on Facebook after the publication of Jazz thing 108 at the beginning of April 2015. Ever since the pianist, keyboardist and composer born in Enschede, The Netherlands, in 1947 quit his apprenticeship as a textile technician in favor of jazz, i.e., around 50 years ago, he has experimented in a beautiful new world of music between hard bop, free jazz and all forms of fusion, from African grooves to European reverence. "I can only be a jazz musician, because I know nothing," he said. "I know nothing! I just have great fun playing, and I rehearse like crazy. I love my instrument, and I have ideas that I try out again and again."

On the evening of May 15, 2015, Jasper van't Hof gave a taste of his sense-seeking playfulness in a full-length concert in Theater Gütersloh, excerpts of which have now been released thanks to close collaboration with the culture radio station WDR 3. He calls the band of the evening "Oeuvre", which also features the tenor saxophonist Harry Sokal from Austria, the Dutch bassist Stefan Lievestro and the Swiss "European Jazz Legend" Fredy Studer on drums. "It's a band with people who have experienced the same as I have in Europe: fusion, free and more!”