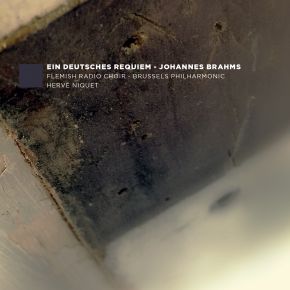 Lore Binon, soprano
Tassis Christoyannis, baritone
With his German Requiem, Johannes Brahms rose up to the challenge Robert Schumann had set his young protégé “to direct his magic wand where the massed forces of chorus and orchestra would lend him their power”. The result was a masterpiece which deviates from traditional Requiem horrors to address all mankind with a message of hope and comfort. On this recording, acclaimed conductor Hervé Niquet fuses his Flemish Radio Choir and Brussels Philharmonic in a concentrated and intense performance, which brings out the expressive and rhetorical essence of music which is at once grand and intimate.
________________________
Hervé Niquet:
I have some scruples in writing the following lines on Brahms and his Requiem, for the literature on these topics is so unbelievably rich. All musicologists, musicians, writers, and critics seem to have praised, admired, analysed, dissected, considered, conceptualised, figured out, and reinvented this work…
And yet, the cross-fertilization of my familiarity with these over-conducted lines, and my passion for rhetoric and symbolism, has urged me to start from afresh, and revisit this music through the accumulated experience with composers from bygone ages, in which rhetoric and symbolism represented the responses to questions which often were too complex or intellectual. My God, it was so simple, so inspiring, and so fertile to explain to the musicians the meaning of each motive, the function and place of each stone in the edifice, without letting ourselves be overwhelmed by a museum-prone approbation which would have moved us to speak sadly and to slow down the train…
Respect for the elementary sense of the text and the vocalism of each phrase have guided us to a simplicity far removed from the patina, which often conceals this Requiem. Once this simple humility is acknowledged, a gentleness suddenly invades each phrase. And then it is pivotal to recognize that there is no sadness on these pages, but an unspeakable kindness immersed in tender melancholy. No sentimentality whatsoever, but a mild enrapture upon happening on each memory Brahms believed to be buried. And please no decorum: this is a concert piece foreign to all incense and mausoleum.
Brahms relies on his musicians not to engage in any liturgical service, but to play a mordant narrative instead. As in the opera, or at a lied recital with an orchestra – light and etheric – or a flesh-and-blood choir terracing the auditorium, unsure whether it should cry or rejoice. Under his giant white beard, Brahms is a man of the theatre. “Requiem” is his best opera!