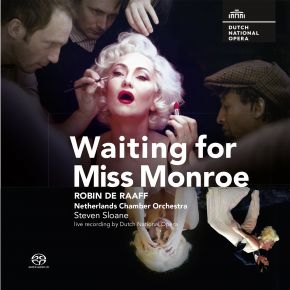 Act I – Work day
Spring 1962. The day’s shoot at the Fox Film Studio is being held up because the star, Marilyn Monroe, has not shown up for work. The entire pro- duction crew is on hold and Fox, the influential film producer, seethes at the thought of the financial consequences. Fox suspects that Marilyn’s drama coach Paula Strasberg and her make- up artist Whitey know more about her absence than they let on, and he takes out his anger and frustration on them. When he learns that Marilyn has called in sick without him being notified, he is infuriated even more, and demands to speak to her personally, by telephone at least. Meanwhile Marilyn, unperturbed, poses for the young photographer Eve. The mood is amiable and professional, the two women taking the occasional champagne break. Marilyn is fascinated by Eve’s pregnancy; she is worried she will never have a baby herself. Marilyn is clearly enamoured with the photo- grapher’s camera, in sharp contrast to her acute fear of the film camera. Eve cannot understand Marilyn’s anxiety. Their conversations are dotted with moments in which Marilyn suddenly withdraws into herself, speaking into a tape recorder. She explains that this is how she communicates with her psy- chiatrist, being unable to talk to him directly. These sessions with the tape recorder are her escape from reality. An attendant repeatedly appears with the message that Marilyn is wanted on the telephone. When she finally answers, Fox informs her of his plan to resume shooting with a stand-in; she hastens to the studio in order to prevent this. The entire studio crew springs into action with Marilyn’s arrival. The stand- in vanishes discreetly. Marilyn is ready for her scene, but her co-actors, two children, are absent as their legally allotted studio time has been taken up with waiting for her. When the director calls for a different scene, this one with a dog, Marilyn is unsure of herself, not having prepared her lines. After some commotion with the dog, who is not as well trained as expected, the take goes well. Even the scene with the children can be shot after all. Everyone is relieved, but to Fox’s chagrin Marilyn leaves again, flying to New York to sing at President Kennedy’s birthday party.
Act II – Birthday
In a Madison Square Garden dressing room, Paula and Whitey attempt to get Marilyn dressed and made up for her performance at the president’s birthday celebration. Having tried to suppress her panic with alcohol and pills on her way to New York, Marilyn is now nearly paralytic. In lucid moments she demands that the president come to her dressing room. She claims he has promised to marry her. Paula and Whitey find it nearly impossible to make her presentable, and time is running out. Marilyn reads a telegram and col- lapses. It is not from the president, but from Fox: Marilyn has been fired for jetting off to New York without permission. The shock of the telegram causes Marilyn to lose her grip on reality. She calls out for her father, and two father figures promptly appear: film idol Clark Gable and her ex-husband, the baseball star Joe DiMaggio. They both come to her aid. Gable assures her she was not the cause of his death, and Joe swears she will always be the only woman for him. They accompany her backstage, but before she is to make her entrance they disappear and are replaced by John and Robert Kennedy. At first they too admire Marilyn and amuse her with their boyish wit and rivalry. But then the atmosphere takes a turn for the worse: they mistreat her and call her a whore. Gable and DiMaggio likewise turn against her. Marilyn somehow manages to pull herself together enough to reach the microphone and perform her legendary rendition of ‘Happy Birthday’. During the applause she has a premo- nition of death.
Act III – Death day
Fox is waiting in his office for Marilyn. He has been forced to rehire her, as there were no suitable replacements with her star status. Marilyn, meanwhile, has started her own production company, and Fox has had to engage her through her own business. When she appears – late, as usual – he tries to win her over, first with flattery and then, when that fails, with intimidation. Marilyn says she never felt appreciated by him and sticks to her guns, albeit with the crutch of alcohol and drugs. She wins the confrontation, but pays for the victory in emotional strain. At home alone, Marilyn is plagued by insomnia and loneliness. She tries to contact the Kennedys, but they rebuff her. The snub upsets her already shaky mental balance. She has no support or companionship. After yet more alcohol and pills she again sinks into a different reality: she is confronted with her younger self, Norma Jeane, who is prepared to do whatever it takes to enjoy a successful Hollywood career. She is surrounded by men who had once admired her. She sees Marilyn as a pathetic has-been, and abandons her to her own fate. Marilyn cracks. From death, she observes the events surrounding her demise with amazement and distance.

Hendrickje Van Kerckhove (soloist)More information
25-01-2016 klassik.com
""(Laura) Aikin makes de Raaffs technically demanding music sound like childs play, mastered with a uncomparable naturalness and impressive ease.""
16-12-2015 The Guardian
"" (...) It is an intelligent if not entirely successful attempt on a tempting but, perhaps in the end, a dramatically intractable subject. (...) ""
01-12-2015 Opusklassiek
"["] .. The recording was quite successful, especially in 'surround' which brings the listener closer to the live experience.""
07-10-2015 De Volkskrant
""One of the focal points of the Holland Festival 2012 was Robin de Raaffs Marilyn Monroe-opera in a libretto of Janine Brogt. Challenge put this work on a perfectly catered double album.""
14-09-2015 NRC Handelsblad
"Three stars ***"