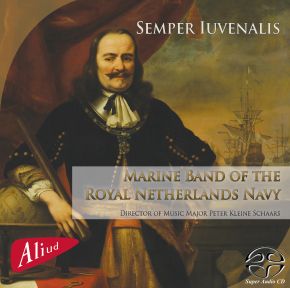 The musical visiting card of the Royal Netherlands Navy, the Marinierskapel der Koninklijke Marine, celebrates its 70th anniversary! This platinum jubilee coincides with the 350th anniversary of the Marine Corps. This CD with marching music is released on the occasion of both jubilees. With the choice of repertoire the Marine Band of the Royal Netherlands Navy shows a subtle awareness of the maritime military music tradition of which it is part.
The repertoire on this CD consists of a choice selection of international and maritime marches. Conducted by Major Peter Kleine Schaars, this does not only pay a tribute to the foundations of military music, but also gives a musical interpretation of the heraldic device of the Royal Netherlands Marine Corps celebrating its jubilee, Qua Patet Orbis (‘As far as the world extends’).

Dear Colin, This is a HYBRID-SACD which means that it can also be played on regular players.

Not a comment, I have a question. Will this CD need a special player to listen to it