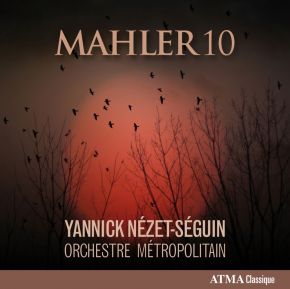 ATMA Classique presents Gustav Mahler’s Tenth Symphony (in its full performing version accomplished by British musicologist Deryck Cooke) with the Orchestre Métropolitain under the baton of international superstar conductor Yannick Nézet-Séguin, founder, Artistic Director and Principal Conductor of this body in addition to his current music directorship of the prestigious Philadelphia Orchestra since late 2012 and a similar role with the Rotterdam Philharmonic since 2008. This release marks the debut CD recording of Mahler’s Tenth Symphony by a Canadian orchestra.

The Yannick Nézet-Séguin & The Orchestre Metropolitain, Canada, performance of GUSTAV MAHLER Symphony No. 10 is remarkable and a FABULOUS piece of Symphonic Art! I would recommend this CD to anyone who loves and has a passion for classical music. (* * * * * Stars)