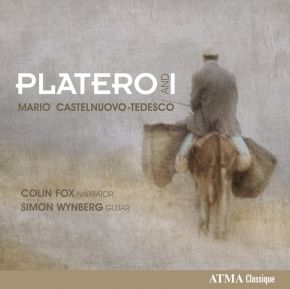 Juan Ramón Jiménez's meditative reflections on the peregrinations of an Andalusian countryman and his loyal little donkey, Platero, have long captured the Spanish imagination. The 138 prose poems that make up Platero Y Yo (Platero and I) were published in 1914. In June 1960 Mario Castenuo-Tedesco began to work on guitar accompaniments to 28 of the poems from Jiménez's Platero Y Yo. They are best described as musical commentaries, reinforcing and complementing Jiménez's prose, and matching the changing moods.
The English versions that Castelnuovo-Tedesco used for his settings of Platero Y Yo were drawn from the complete translation by the American academic Eloïse Roach which was first published in 1957. Actor Colin Fox and guitarist Simon Wynberg have chosen this English version for their recording.
In assembling the Platero cycle Colin Fox and Simon Wynberg have chosen 18 of the most compelling settings and organized them in a way that follows a seasonal narrative while also providing effective musical and emotional contrasts.